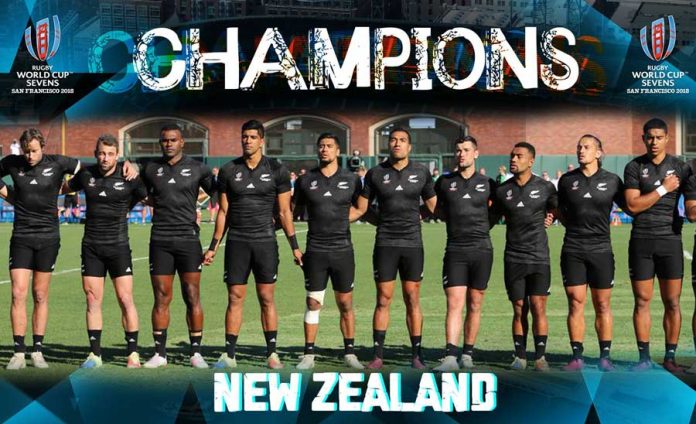 It completed a successful weekend for the New Zealand Sevens game as both the men’s and women’s sides won the titles, a repeat of their recent efforts at the Commonwealth Games on the Gold Coast.

It was the third time the men had won the world title after they first claimed it in Argentina in 2001.

Again, it was their set piece dominance that proved the key to the win. But against England it was their lineout success, twice stealing England throws, to claim tries. Earlier, in their semifinal win over Fiji it had been from the scrums that New Zealand launched their winning assault.

Sione Molia scored the first from a lineout when beating two English tackles.

Then after England were pressured into throwing a forward pass in their own 22m area, New Zealand won the scrum and took the play to a goalline ruck when Tim Mikkelson was grounded just short. But Molia, at halfback, grabbed the ball and put it on the goalline for the try.

England came back with a well-constructed try for Mike Ellery to go to the break 7-14 down.

🏆 Co-captains with the gold! #RWC7s pic.twitter.com/oBfmRgC4lF

Another lineout win saw player of the tournament Joe Ravouvou get the ball on the end of the line to skin his marker with sheer speed on the narrowest of channels down the sideline to take New Zealand to a 19-7 lead.

England struck again, this time by running the ball from the restart for Ruaridh McConnochie to get over wide out.

But from the restart substitute Trael Joass provided the set up work and Akuila Rokolisoa did the finishing to put the issue beyond doubt. There was only time for another restart but that gave Joass the chance to beat the defence again for the final try, 1m 41s into injury time.

Veteran Tim Mikkelson, who was player of the tournament at the last World Cup, said the win was massive.

“We knew coming it in was going to be tough, We nearly got knocked out by France but raised it against Fiji. Credit to the coaching staff, coach Clark Laidlaw is big on culture and he brought the guys together. The women put the pressure on us by winning their final.

“But credit to England. They are an amazing team and they played some amazing rugby this weekend, we’re humbled to get the victory,” he said.

Curry said he was proud of the side’s effort.

“We had four really tough games and credit to England. But I’m so proud of the boys.

“We have been working really hard for each other on the field and working hard off the ball and I think that showed,” he said.

England qualified for the final by knocking over South Africa 29-7 and New Zealand followed with a 22-17 win over Fiji.

Magnificent Sevens: Who to look out for in the 2018 Dialog...

Dialog and Access kick off Mercantile Sevens in style