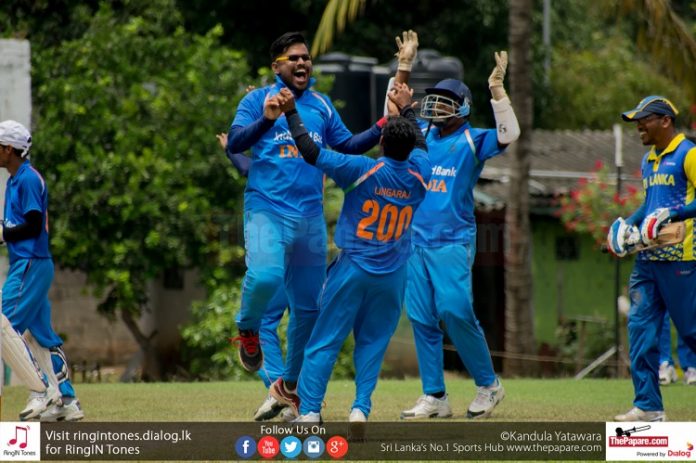 Ajay Kumar’s unbeaten knock of 155 scripted another massive win by 115 runs in the 2nd Blind Cricket ODI against Sri Lanka at Bhuneshwar.

The touring Lions needed a big turn around if they were to get their first win in the whole tour but, it was once again demolished through yet another dominating batting performance by the hosts. Right through the series Indian top order have dominated and that’s one of the main reasons why they managed to win all matches in the tour. The series tally stands at 7-0 which goes to show how one sided it has been.

However, Sri Lanka managed to penetrate the top order in this match. Indians drafted in some new faces and it opened an opportunity for the visitors to sneak ahead. Apart from R Linga who scored 65 at the top, the rest of the top order was dismissed cheaply. Just when things were going Sri Lanka’s way, Indian skipper crashed the  party. Ajay Kumar took it upon himself to resurrect their innings and he did so in style. His unbeaten knock of 155 had 25 boundaries. He found good support from both S Ramesh and A Gariya with the latter scoring a brisk century.

India ended up at 464, a mammoth target for the struggling Lions. Their start wasn’t what they desperately needed. But after losing 2 wickets for 55 runs, dkipper Chandana Deshapriya and K Kumara added a valuable partnership to get them back into the game. However, the loss of Kumara for 62, took away any chances of a fightback. Deshapriya was stranded but he kept going until he was finally run out for a brilliant 101.

Lankans couldn’t even get close as they were restricted for 351 runs. Indians took the win and the series with one game to spare.