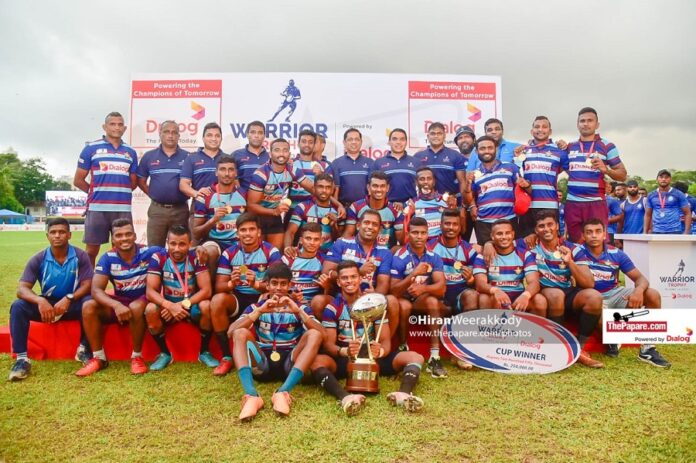 Police ‘A’ ran out of gas as Air Force ‘A’ got the better of the Cops to record a convincing 24-nil win to secure the Cup segment of the Warrior Trophy Rugby 7’s tournament. CH & FC, Army ‘A’ and Havelock’s SC, won the Plate, Bowl, and Shield segments respectively.

Day 2 kicked off with the Cup quarter-finals as CH & FC took on Navy ‘B’. The star-studded CH team were made to work for their win as they qualified for the semi-finals in difficult fashion.

Police Sports Club made easy work of Army Colts as the Cops, playing on their field steam-rolled the Colts lads to record a 19-05 win and make their way into the next round.

A young, mobile Air Force outfit continued their run from day 1, this time bagging a surprising win over Army ‘A’.

The final Cup quarterfinal of the morning saw Navy ‘A’ battle it out against Havelock Sports Club. The Pinks were held scoreless by an impressive Navy ‘A’ team. Toothless Havelocks had no answers as they failed to penetrate the Sailors, eventually folding 31-00.

Police Sports Club outsmarted and outmuscled favourites CH & FC to win the first Cup Semi-final. Sachith Silva was the star of the game as he put on a show with his speed and exemplary footwork.

The big named CH & FC team failed to deliver at the crucial junctures as Police crashed their party to enter into the final on their paddock.

The second Semi-final was as close as the first. The underdogs managed to get the better of favourites as Air Force ‘A’ booked their ticket into the final over Navy ‘A’.

Navy led 7-5 in the game, going into the final moments. Former Isipathana winger, Ramitha De Silva scored in the dying moments of the game to help secure a final berth for a young Air Force outfit.

Prior to the Cup Semi-finals, Navy ‘B’ got the better out of Army Clots while Army ‘A’ defeated Havelocks in the Bowl/ shield Semi-finals.

Air Force ‘B’ got the better of Police Griffins after the hooter as former Royalist Ashok Vijayakuma converted Imesh Aponso’s try to secure a surprising 7-5 win over the Police Griffins outfit.

Havelock Sports Club secured a consolation win on day 2 as they managed to beat Army Colts.

Havelock had looked like a school-boy outfit in the two previous games of the day, however, they bounced back in typical fashion, scoring a 5-try win over Army Colts to ensure they secured the Shield segment.

Valiant Navy ‘B’ fell short at the hands of Army ’A’ as the Soldiers secured the Bowl in the Warriors 7’s.

Army ‘A’ got off to a sublime start, scoring thrice to take an early 19-point lead.

Raveen De Silva began the comeback for Navy ‘B’ as he scored first for the Sailors. Navy hung in there and managed to score after the hooter, however, a failed conversion meant the Sailors fell short by 2-points to hand Army ‘A’ the Bowl.

CH & FC took on Navy ‘A’ as both teams locked horns for the Plate segment.

Navy ‘A’ got off to a good start with a try through Sachinka Abeysekara. Thilina Weerasinghe added the extras from a tricky angle to make it a perfect-7.

Avishka Lee and Warren Weerakoon scored consecutively for CH & FC as they managed to lead Navy at halftime.

Amith Madushanka and Thilina Weerasinghe scored right after halftime to regain the lead for the Navy as they looked to make a comeback.

Navy’s hope of taking back silverware was soon demolished by Rashane Gunawardena and Samuel Ogbeob as the two youngsters scored in quick succession to hand CH & FC the Plate segment.

Air Force began on the front foot as they put the Police outfit under pressure. Ishara Madushan saw yellow for a tip tackle on Sachith Silva.

Even though Air Force were a man down, they scored through Ramitha De Silva to break the deadlock in the crucial final. Sachika Fernando doubled the Airmen’s lead as Police seemed to be caught napping in the first half.

Air Force started the second half with one hand on the trophy. They tightened their grip on the Cup through a try from Nuwan Perera under the post as the Airmen dominated proceedings.

Prior to Nuwan’s try, Kasun Suranga saw yellow as Police ‘A’ seemed to be going down fast in the Cup final.

Nuwan Perera added insult to injury as he knocked over a penalty after the hooter to record a convincing 24-nil win to bag the Cup of the Warrior Trophy.