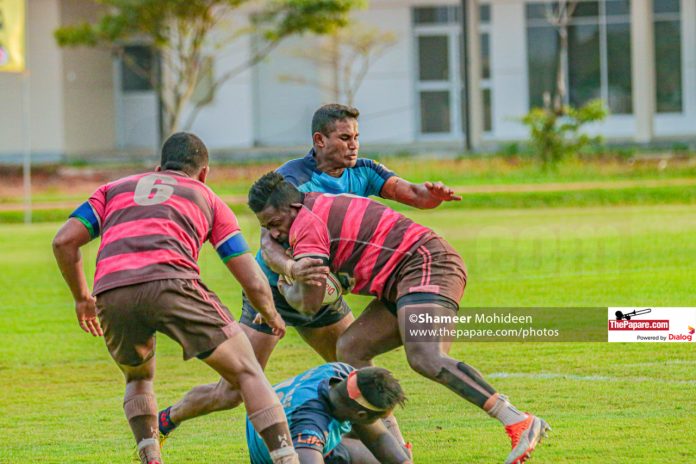 Air Force Sports Club was punished for their complacency as hosts Havelock Sports Club ran away with a 30-19 victory to move above CR & FC on the points table of the Dialog Rugby League.

The hosts’ Havelocks made a raft of changes with new look back-row, Vimukthi Rahula finding his way back into the run-on XV and a surprise with Akash Iddawela slotting in at inside-center.

Air Force made three alterations with Parakkarama Rathnayake, Amitha Silva and Imash Priyadarshana all being reinstated into the team.

Sandesh Jayawickrama opened the scoring for Havelocks after a fluent passage of play to begin proceedings. Air Force paid the price as the five-eighth made no mistake from the tee to give an early 3-point lead. (HSC 03-00 AF)

Air Force struck back through Gayantha Iddamalgoda and took the lead in the game for the first time as the hosts’ discipline let them down on two occasions in front of the upright. (HSC 03-06 AF)

The Air Forces’ inability to turn possession into points cost them dearly as Havelock grabbed the lead in the game in the 24th minute through Shanaka Kumara and not looking back from then on.

Jayawickrama’s pin-point accurate cross kick found the hands of Randy Silva on the wing as the former Pathana lad Basketball-passed the ball inside to onrushing Shanaka Kumara for the fullback to touch down. Sandesh added the extras as the lead changed hands yet again. (HSC 10-06 AF)

Iddamalgoda reduced the areas with a further 3-pointer, however, Jehan Seelagama’s yellow card moments later proved to be costly as the Centre was sent to the bin for a high shot.

Amir Fajudeen scored the hosts second of the game in typical fashion, crashing over from the tail of the maul. Jayawickrama failed with the extras, however, the hosts’ advantage was extended further with the halftime closing in. (HSC 15-009 AF)

Gayantha Iddamalgoda cut the deficit, making it a three-point game going into lemons as Havelock Centre Akash Iddawela saw yellow on the stroke of halftime.

The home team came out firing after an earful from coach Sanath Martis as the lads in Pink scored first in the second half to put a cushion between the two sides.

Fajudeen scored was the beneficiary as he scored his second of the evening as the home team pulled further ahead.

Air Force scored a consolation try through prop-forward Ranuka Medagedara the tide turned slightly in favour of the visitors. Iddamalgoda added the extras, reducing the areas, giving the visiting faithful something to cheer about.

Randy Silva dashed all hopes of a comeback as the winger added the finishing touch to a well-worked move from the home team sealed the crucial bonus point in the dying embers of the game.

Jayawickrama failed with the extras however, the game was brought to an end giving Havelocks their 9th win of the Dialog Rugby League season.

The Emerging players of the DRL!

Will the Dialog Clifford uncoil?

Video – My secret is that I always be with the...