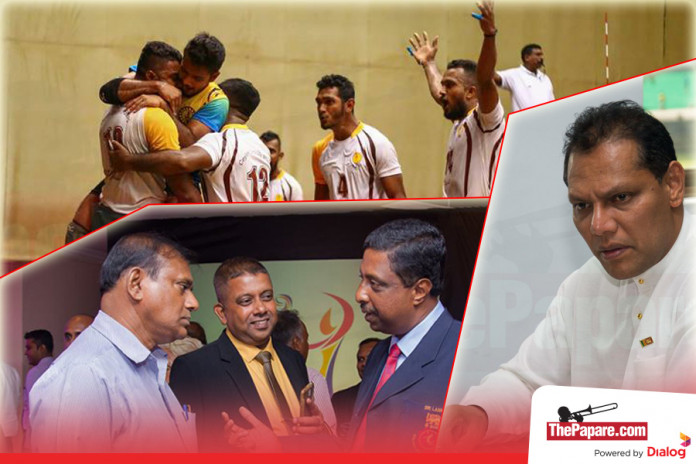 The men’s group stage matches of the Munchee National Volleyball Super League Championships that took place on the 14th of November has been shrouded in controversy due to the sudden defeat of the favourites, Ceylon Electricity Board (CEB) at the hands of the National Youth Services Council team.

However, the Air Force team filed a complaint to the Minister of Sports claiming that the CEB team lost the match intentionally against the National Youth Services Council team in order to face the Air Force team.

It was apparent, however, that the CEB team were under the cloche during the course of the match as they lost the second round, which implied that they were losing their grip in the match. But the strong spirit within the team managed to steer the team to victory, ultimately. In hindsight, it was a match filled with genuine sportsmanship.

The question is why did the Air Force file in such a complaint when clearly there seemed to be no infraction of the law? Furthermore, group B saw the Ports Authority and the CEB have the same results in terms of matches won and lost. However, the latter topped the group due to the scores achieved in the previous matches, which were greater than the Ports Authority team.

The only loss for CEB coming at the hands of the National Youth Services Council team in group B meant that CEB would be facing Air Force who placed second in their respective group.

However, upon closer investigation it was identified that the result of the match did not seem to decide the opponent for the CEB team. Therefore, implying that even if CEB did win the match their opponent in the semi – final would still be Air Force.

ThePapare.com speaking to the Sri Lanka Volleyball Federation had this to say to the matter;

“We were not notified of any such complaint (from the Air Force). Even still we do not know what the nature of the complaint is”

Such inquiry by the Air Force would make one question about the true spirit of the game.

“In this case we cannot take any action. Any team is very satisfied when they are up against easy teams (CEB vs. Air Force). The National Youth Services Council team cannot be considered an easy team since they showed their mettle with Navy and Ports Authority by winning several sets. I do not think there is any suspicion of unsportsman like conduct” he added.

But it was clear that the CEB team was not up to the expected standard they would normally possess on the day of their loss against the National Youth Services Council.

One could only hope that the response to the claim put forward by the Air Force from the Minister of Sports is one that would not taint the standard of the sport, the future of the sport, and also the current status of the sport.