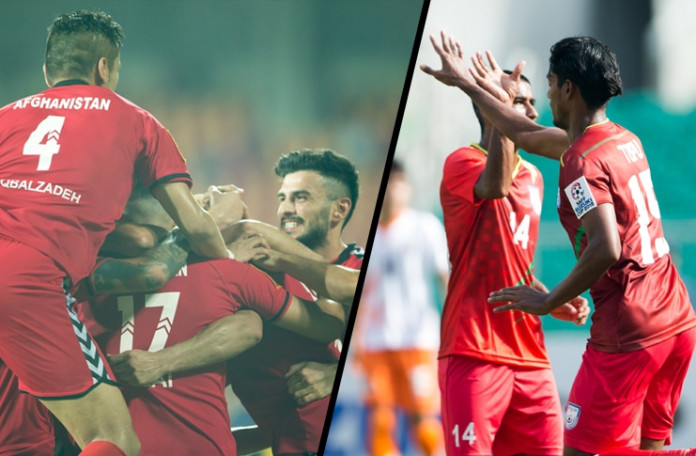 Bangladesh got a consolation 3-0 win over Bhutan while semi-finalists Afghanistan defeated Maldives 4-1 in the final group stage matches.

Bangladesh thumped 10-man Bhutan 3-0 in a match where both sides were looking to go home with a win for their fans.

The winners looked to be the better of the two sides most of the game and things were made easier when Bhutan were reduced to 10 men midway through the first half.

First half header from Topu Barman coupled with a brace from Shekawath Rony gave Bangladesh a convincing victory over a Bhutan side who looked out of ideas.

Both sides made a few changes for their final match of the tournament. Bhuan introduced Lungtok Dawa into the starting lineup. Bangladesh stuck with the striking duo of Shekawat Rony and Newab Jibon up front.

The teams found chances easy to come by in the opening minutes. Bangladesh wasted a glorious chance in the 6th minute as Topu Barman blasted over from Shekawat Rony’s cross.

Bangladesh took the lead in the 8th minute from a corner as the ball, which was slightly over hit, was flicked back into the area by Yeasin Khan who found the head of Topu Barman.

The Bengal Tigers had another chance to equalize in the 13th minute but Newaj Jibon’s nimble feet could only get the better of the full back but not the goal as his shot found the side netting.

In the 23rd minute, the situation worsened for Bhutan when a case of mistaken identity saw Chimi Dorji sent off for a tackle from behind on Hemonta Biswas inside the box by Jigme Dorjee. Shekawat Rony dispatched the resulting spot kick in style to extend Bangladesh’s lead in the 24th minute.

The Dragon Boys failed to gain any rhythm in their build up play and Pema reacted early by bringing on Kezang Wangdi for Lungtok Dawa in the 37th minute.

Shekawat Rony had a field day against the left side of Bhutan defence, this time getting the better of Jigme Dorjee before having his shot saved by Hari Gurung in the 40th minute. On the stroke of half time, Captain Mamunul Islam attempted a shot from outside that was well saved by the goal keeper.

The impressive Rony got his reward in the 67th minute, as a ball played from defence found the striker on the run into the box, who calmly slotted the ball in to make it 3-0 to Bangladesh.

Bangladesh found chances easier to come by towards the end. With the Bhutan players looking lost both in midfield and defense, Zahid Hossain, who had come on for Hemonta Biswas put in an inch perfect cross into the box for Newaj Jibon in the 74th minute but the forward failed to connect.

Sohel Rana had the last chance to extend Bangladesh’s lead even further but a terrific reflex save by Hari Gurung denied him in the 90th minute.

The match ended with Bhutan well and truly beaten. Both teams have failed to make it to the semifinals and will be hoping they can deliver a better performance in the next SAFF Suzuki Cup.

Defending champions marched on into the semifinals with a 4-1 win over second placed Maldives in the final group stage game of SAFF Suzuki Cup 2015.

The game saw an array of attacking chances for both sides, with Maldives finding it difficult to match the defending champions’ skill on the ball in the end.

Captain Faysal Shayesteh opened the scoring for Afghanistan, and although Ali Fasir equalized, it wasn’t good enough as the defending champions went on to extend their lead through a brace from Omid Popalzay and a goal from Ahmad Hatifie.

Both sides opted to rest some of their key players going into the match. Top scorer Khaibar Amani,Noraollah Amiri,defender Masih Saighani, and set piece specialist Kanischka Taher dropped to the bench.

Maldives opted to leave star striker Ali Ashfaq and the impressive Imaaz Ahmed on the bench with Hassan Naiz and Ahmed Nashid the scorers off the bench in their last game getting a look in the starting XI.

Aghanistan pushed forward with the ball right from the start, with Maldives content to sit back and counter.

The first real chance of the game however fell to Maldives in the 15th minute, with an Ali Fasir freekick falling into the hands of Oays Azizi.

Two minutes later, a ball over the top found Ahmed Nashid, whose shot beat the keeper but not Omid Homauni who cleared it away before it crossed the goal line.

The defending champions regained focus to take the lead in the 20th minute, as a defensive error allowed Zubayr Amiri to flick a header into the path of Faysal Shayesteh who slotted it past the goal keeper.

Maldives did not have to wait long for their equalizer. In the 32nd minute, Anoush Dastgir’s poor control allowed Ali Fasir to pounce to make it 1-1.

The defending champions continued to push hard and their passing in and around the box were a bit too much for Maldives to deal with.

A foul conceded in the 34th minute allowed Omid Popalzay to step up and deliver a sensational free kick into the top left corner that left the goal keeper with no chance.

They went onto extend their lead through Ahmad Hatifie in the 51st minute when a corner bounced into the path of the midfielder who hit a ferocious volley into the net.

Maldives found it hard to deal with Afghanistan’s efficiency in front of goal as a free kick from deep in the 54thminute was headed on by Zubayr Amiri into the feet of Omid Popalzay who doubled his tally for the night with a fine low shot into the net.

Ricki Herbert brought star striker Ali Ashfaq with less than 15 minutes to play until the final whistle. Maldives were looking disjointed in attack and Herbert hoped Ashfaq’s introduction would bring efficiency into the Maldives attack.

In the end, it wasn’t enough as the match ended 4-1 with Maldives unable to match the energy and technique of their counterparts.

The win sees Afghanistan take on Sri Lanka in the semifinal, with Maldives poised for a tie against hosts India on December 31.