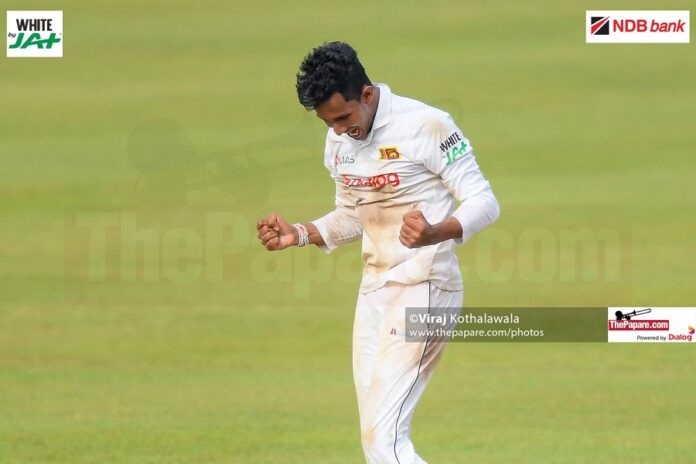 In all, there were five PCR tests and ten Antigen tests over a two-week period during the two Tests between Sri Lanka and Bangladesh at Pallekele. It was fully worth it for we witnessed the best ever debut by a Sri Lankan in Test match cricket.

In fact, it was the tenth best bowling analysis in the history of Test match cricket by a debutant. Praveen Jayawickrama’s 11 for 178 will be remembered for a while.

In the mid-1990s, Naveed Nawaz was scoring heavily in domestic cricket but never got a look in to the senior side as the national cricket team was packed with some fine batsmen. He was philosophical, saying that you have got to be at the right place at the right time.

In Praveen’s case, it has worked perfectly. The lead spinner Lasith Embuldeniya is injured and so is next in line Duvindu Tillekeratne. Prabath Jayasuriya was called up to fill the void but he failed the skin fold test. What do we do now? The selectors panicked.  They could have easily gone back to Malinda Pushpakumara, who has a proven track record in domestic cricket. But instead, they were bold and called up someone with just a handful of First Class appearances.

It was good that Praveen did not get a game in the first Test on a flat deck. He would have hardly made an impact on the surface where over 1200 runs were scored and just 17 wickets fell. But when the wicket had enough assistance in the second Test, it was important Dimuth Karunaratne won the toss, Sri Lanka piled up the runs and the stage was set for Praveen to run through the opposition.

Praveen bowled throughout from Hunnasgiriya End. Usually his spells were long ones. He doesn’t turn the ball as much as his club mate Ramesh Mendis, who finished with six wickets. Ramesh gets more bounce as well. So, how come Praveen ended up with double the wickets as Ramesh? The left-arm spinner’s key to success is, he is on the money. Building up pressure by bowling at one spot and then he slips in the arm ball occasionally to leave the batsman helpless. Playing for turn, the batsman often defends on the wrong line and when the ball hits the pads, he is dead as a duck.

It’s not just the arm ball that did the trick. Ask Najmul Shanto, one of the technically soundest Bangladeshi batsmen. There was this ball that pitched wide outside the off-stump, turned sharply and sneaked through the left-hander’s bat and pad to hit the top of leg-stump. That was classical bowling.

Praveen turns the ball, has got superb control and an arm ball too but more importantly, what makes him special is his ability to outsmart the batsmen.

There would have been better figures for the 22-year-old had Sri Lanka been more disciplined with their fielding efforts with Oshada Fernando at short leg and Lahiru Thirimanne at slips being the culprits. Or if skipper Dimuth Karunaratne had not taken the second new ball straight after it was available in the first innings. Young Praveen was on song but Bangladesh’s tail was child’s play to Suranga Lakmal, who struck in successive overs, with the new ball.

How fans wish that this remained a three Test series as was originally scheduled. It was cut down two by SLC the moment both Bangladesh and Sri Lanka were knocked out of the World Test Championship. We need to strike a balance between Tests and white ball cricket and not just rookies like Praveen, even seasoned campaigners like skipper Karunaratne miss out given the rich form he is in at the moment.

The likes of Dimuth and Praveen have to wait for another six months for Sri Lanka’s next Test assignment – also against Bangladesh away from home.

For a year we should play between ten to 12 Test matches but this is not going to be the case sadly as profitable white ball encounters are taking over from the longer format of the game.

Praveen’s ability will be known when Sri Lanka play against India or Pakistan. He will have his ups and downs but what a find he has been for the sport. We seem to be finding match winning batsmen without any trouble but match winning bowlers are few and rare and even the ones who win you a series or two, fade away after a brief while.

But there’s reason for you to believe that Praveen will not be a one Test wonder because he has got good basics to fall back when things don’t go his way. He has got to learn much moving forward. Let’s start with the simplest of things; tucking your shirt in while on the field.