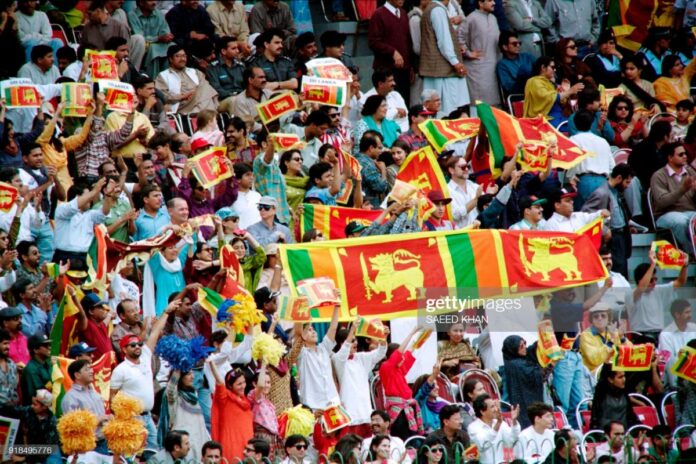 A die-hard fan of Sri Lankan cricket team told this writer that if ever he won a lottery, he would invest that money on a movie.

He would hire Steven Spielberg to direct the movie and it would be titled ‘Cinderella Story’. The movie is on how the Sri Lankan cricket team, having never qualified for the second round of the World Cup in the first five editions (four wins in 20 games), won the sixth edition in 1996 without losing a game. He better win UK’s Euro Millionaire rather than any local lottery because his cast includes an impressive list with Tom Hanks set to play Arjuna, Denzel Washington set to play Aravinda and Wesley Snipes coming in for Santh Jayasuriya.

It was certainly a fun filled day with the state organizing a felicitation ceremony at Temple Trees in the morning followed by a private event at Shangri La in the evening to commemorate the ’96 World Cup winners.

One thing that stands out of the 1996 team is their camaraderie. It was so heartwarming to see all players spontaneously going and greeting the parents of other players, touching their feet. The wives and children were seen seated at another table. The current players have much to learn looking at the unity of this team. As Asanka Gurusinha aptly summed up; he had a second family and that was his team.

It was also great to see old timers being invited for the occasion.  Ana Punchihewa, the visionary President of the Board delivered a speech. Neil Perera who is 93 was there as well. It was Perera with his crafty behind the scenes moves who ensured the sub-continent hosted the 1996 World Cup. Perera was the Manager of the team when Sri Lanka won their first Test match overseas. The coach at that point was former Senior DIG T.B.  Khelgamuwa. It was great to listen to their stories.

Prime Minister Mahinda Rajapaksa delivered a stunning speech and many were in agreement that it was one of the best speeches they have heard in recent times. Among the topics he touched on were South Asian solidarity. It is not so easy to bring India and Pakistan together often and it was only possible by that visionary thinker Jagmohan Dalmiya, who went onto break the stronghold England and Australia had in the administration of the sport just before he became the first Asian President of ICC.

The Asian block stood together during the crisis as ICC was not keen on giving Sri Lanka the full points from the games against West Indies and Australia. This is despite the political differences of India and Pakistan. It is sad to see that Asian solidarity is not seen anymore as BCCI has joined ranks with England and Australia in the novel concept called Big Three.

The Premier also remembered the role played by his political rival Gamini Dissanayake, whose 80th birth anniversary falls on Saturday. It was Dissanayake who won the nation Test status. That was 40 years ago. He was 39 at that point. Imagine the things that the likes of Dissanayake achieved before turning 40. It’s a shame that we lost so many of our political leaders at their prime. Lalith Athulathmudali, who would have eventually come to cricket administration – having been President of NCC was another. Lalith died at 56 while Gamini died at 52.

Some of the stories related by players were full of laughter and there were quite a few that you heard for the first time. One such was the fitness regimes under Alex Kountouris. Before Alex had come in according to Hashan Tillekeratne, players maintained fitness levels by running a few rounds at NCC, then go for a string hopper and chicken curry meal and go home. But after Alex it all changed. Yo-Yo test, the beep test and testing of skinfolds were all done regularly.

Alex was so tough on players’ food intake that coconut milk, an essential in local cuisine was thrown out. Hashan said with a smile that this helped to improve life expectancy of all players. Sweets were also banned from players’ food intake and the only dessert they were allowed were fruits. The results were stunning. The players’ fitness levels improved remarkably and in turn the batters occupied the crease for a longer time and the bowlers sent down longer spells while the fielding was more athletic.

These are things that the public don’t get to see but they are so essential for the success of a team. One reason why the competitive nature of our cricket nosedived was less attention was placed on key points like fitness.

It was a great move by Dialog and Rupavahini to do a repeat telecast of the final against Australia and at several places people installed giant screens and were enjoying the game reliving our finest sporting moment.

The interest the public showed to watch the repeat telecast of the World Cup final was immense. There is also lot of enthusiasm among cricket followers to watch the Legends series with the Sri Lankan side on the verge of the finals. However, the same enthusiasm has not been shown to follow the national cricket team. If the Legends game and a Sri Lankan game in West Indies happen at the same time, most fans opt for the former. This indeed is a worrying sign.