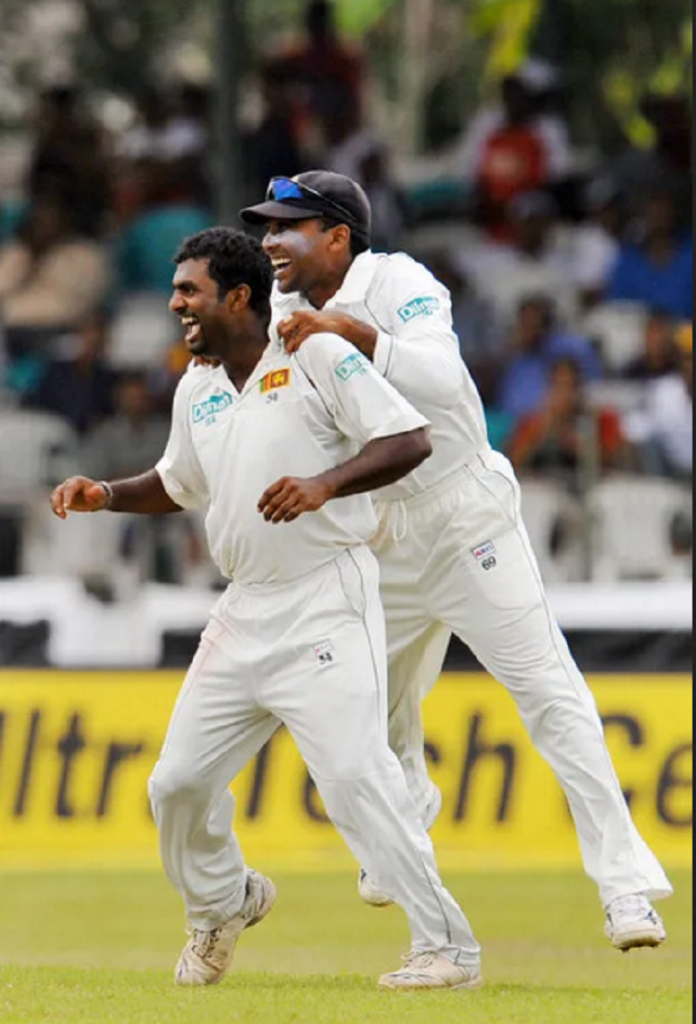 Following is the letter written by Muralitharan to Jayawardene.

Many congratulations on being inducted into the ICC Hall of Fame. This is a great honour for any cricketer – to be recognised for achievements over a long period of time.

It is something we cricketers truly strive for. We have been lucky enough to have done something we love, passionately, throughout our careers. So, to be included among the all-time greats in such fashion is something truly incredible and to be cherished forever.

It’s a lifetime award and it shows the respect you have gained over the years from your friends, competitors and the ICC, so seeing your name added to the list is special.

As for me, I was surprised to be the first Sri Lankan inducted into the ICC Hall of Fame. Now you, my friend, are getting inducted. It makes me so very proud because I know what you have done for Sri Lankan and world cricket over the course of your career – you are something special.

Looking back at your playing career, there are so many highlights. You played a brilliant innings in the ICC Men’s Cricket World Cup 2011 Final – an unbeaten hundred against India. That was a special innings, even if we did not end up winning the trophy.

I can remember another innings that you played in a Test match: 166 against Bangladesh in 2008. It is a memorable one because it came in the second innings on a pitch aiding turn and which was really difficult to bat on.

That’s what was great about you. You played so many wonderful innings and were always happy to be in the team, getting a lot of runs. There was less pressure on me to take wickets because once you put on all those runs, my job became easy. That is why you are one of the most important players in Sri Lankan cricket history.

More than that though, you are a great human being and a very soft, kind guy away from cricket. In sport, everyone sees that champions are always very competitive. On the field, you had this ability to switch on, you were a great person to be around and play with.

When you became captain, it was your calmness that was key because some players can get so excited. But when you get excited, you can make wrong decisions, so it was that calmness that put you in the right place – I think that is why you are doing a fabulous job as coach.

It isn’t just for one individual moment that you are being inducted into the Hall of Fame, it’s a reward for the toil over the years and everything you contributed for Sri Lanka.

Those are all taken into consideration when choosing who is inducted and the ICC thinks it is right that you are the next Sri Lankan to be chosen, to join Kumar Sangakkara and me in the Hall of Fame.

You have been selected because as a captain you were very successful, you consistently delivered as a batter and then as a fielder, you took a lot of catches ­– more than anyone else. You have done everyone in Sri Lanka proud.

But in the first match, whenever you got a chance, you delivered. That’s a talent and everyone saw what you had in your batting and thought you were going to be the future – we all knew straightaway.

I remember thinking at the time that you were going to be one of the best batters in Sri Lanka. You started as you meant to go on, and you stayed that way until you retired.

Like many subcontinental players, you were a very good player of spin, and in those conditions, you were so hard to get out. Early on in the innings, maybe the fast bowlers had a chance but once you got set, it was very difficult to ever get you out because you had the talent, the ability and you could bat for long.

If anyone questions that, they just need to remember the 374 you scored against South Africa in 2006, which showed that you could stay at the crease for as long time as anyone else and score big runs.

You excelled at fielding, particularly in the slips. You could stay there and take catches all day, while you were also very good at silly point. For that, my friend, I am very grateful.

I bowled a lot in Test cricket, so you took a lot of catches off my bowling. It was fitting that you took the catch to get me my final wicket. There must have been something special between us because ‘caught Jayawardene bowled Muralidaran’ happened more than any other bowler-fielder combination in Test cricket history.

The reason they chose you as Sri Lanka captain is because you are a special cricketer. Even though there were a lot of senior players who could have been picked for that job, you were selected because of your cricketing brains and you were able to calm us down in the field.

You are one of the game’s great thinkers – you have already excelled as a coach because of it and having worked in international cricket for 20 years, that experience of knowing how to handle situations is there. As a coach, you have to think like a captain so it should it be no surprise that you have made that transition so easily.

Looking back on the fun we had, I fought with you in the field – always asking for the ball to be given to me when I wanted to take a wicket! Sometimes you felt it was not the right time to go to me, so I would just force you and fight you to take the ball and try to bowl. Those are things that happen in cricket and it is something all bowlers do, and the best thing is, I always won!

I would like to wish you all the best for the future and just want to say – keep going, don’t give up. What you have achieved as a player and as a coach is amazing.

Make sure that by the end of your career, we are in awe of you as a coach in the same way we remember you as a player ­– one of the all-time greats.