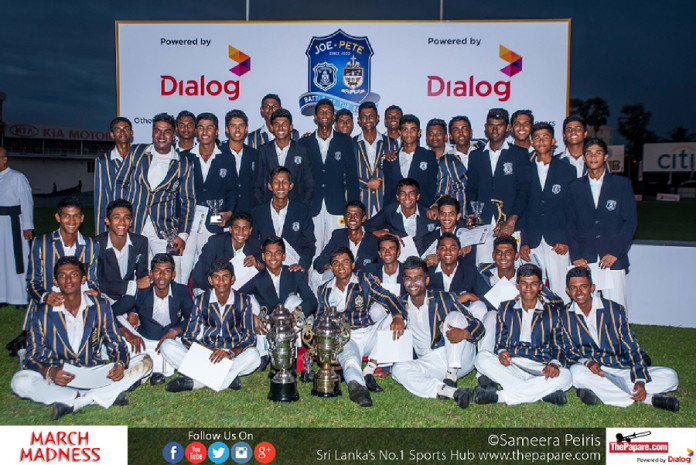 St. Joseph’s College and St. Peter’s College settled for a draw in the 83rd Battle of the Saints which concluded today at P. Sara Oval Grounds.

Jehan Daniel who made a match-saving century yesterday, once again saved the day for St. Joseph’s College with a gritty 42 in the second innings after the Peterites ended their first innings on 188 for 8 from their allotted 60 overs in reply to St. Joseph’s first innings score of 205. The boys from Bambalapitiya ended day the match on 99 for no loss in chase of 181 in the final hour.

The Peterites resumed day two on 138 for 5 and in the final allotted 13 overs; they managed only 50 runs losing all three wickets to Nipun Sumanasinghe who ended with fine figures of 4 for 49.

Jehan Daniel rescued St. Joseph’s College with a superlative, unbeaten century as the 83rd Battle of the Saints hangs in the balance after the first day’s play at P. Sara Oval Grounds.

Vice-Captain Manelkar De Silva top sored for the Peterites with an excellent 51 from 78 balls while Shalith Fernando made a patient knock of 47 yesterday. The disappointing fact would be the slow run-rate of 3.13 maintained by St. Peter’s College batsmen knowing that the first innings is restricted to 60 overs.

With a slender lead of 17 runs in the first innings, the Josephians closed down the game as they battled for 77 overs in the second innings managing only 163 runs at a poor run-rate of 2.12 per over.

Ameen Miflal and Manelkar De Silva ran through the Josephian middle order sharing five wickets but it was the Man-of-the-Match Jehan Daniel who saved the Josephians after getting off the mark with a big six. Pahan Perera and skipper Harin Cooray put up a fighting 40-run stand for the 8th wicket in more than 25 overs.

The 83rd Battle of the Saints between St. Joseph’s College and St. Peter’s College will be played on 3rd and 4th March at…

The Peterite openers, Santhush Gunathilake and Anishka Perera provided some late fireworks for the spectators as they clobbered the Josephian bowlers to all parts of the ground in the final hour.