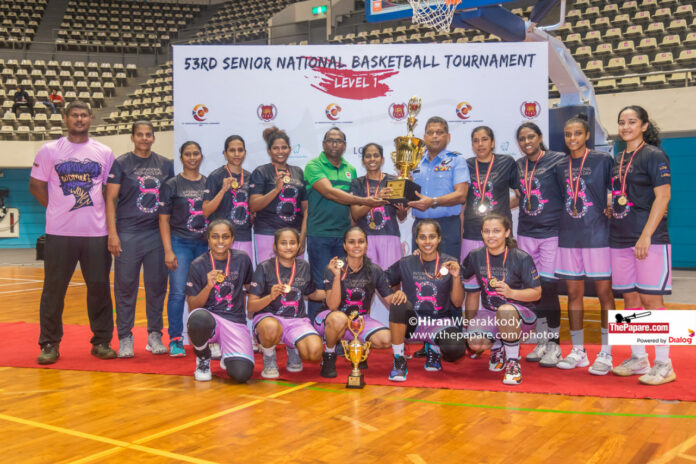 Both the final and the consolation final of the 53rd Women’s Senior National Basketball Tournament were worked off at the Sugathadasa Indoor Stadium on the 8th of March 2022.

In the all-important final, the Mercantile Services team took on the Air Force team, which the former won in style.

It was quite a stiff fight until the penultimate quarter, after which the Mercantile team put a substantial lead, to break free of their opponents.

By the end of the third quarter, the Mercantile team were leading by 10 points with the score line at 52 – 42.

The final quarter was a mere formality as Air Force never recovered from the fallback. Mercantile ended the game with 65 points as opposed to the 55 points the Air Force scored.

The consolation final was yet another exciting game as Jaffna took on Hambantota.

After a neck-to-neck tussle between these two teams, Jaffna lost the game by just 1 point.

At the end of the first quarter Hambanthota led by 8 points at 19 to 11. The Hambantota team never allowed the Northern team to overtake them until the final quarter. With just over 2 minutes to go the spirited Jaffna girls tied the scores and soon led by a point.

But, Hambantota fought their way back in the final 2 minutes and put pressure on the Jaffna girls, forcing them to make errors in their play. The game ended with scores of 64 – 63 in favour of Hambantota.

The Mercantile Services skipper, Imesha Thathsarani was adjudged the Most Valuable Player of the tournament while her team clinched away the championship.