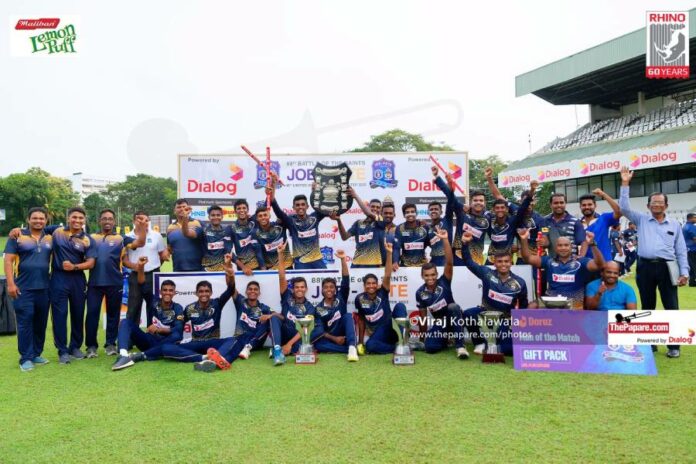 After being in a peculiar 61 for 6, Peterite Skipper Wanuja Kumara smashed a brilliant, rear-guard hundred to rescue St. Peter’s College along with Danal Hemananda, who made a fighting 81. After posting 245 on the board, the Peterite spinners bowled extremely well to restrict St. Joseph’s to 219.

After 48 games, St. Joseph’s led the tally with 24 wins, whilst St. Peter’s registered their 21st win. St. Peter’s won this encounter after a lapse of five years.

Dunith Wellalage took a screamer at cover-point to dismiss Sanshay Gunathilake, and then got Nimuthu Gunawardene caught at first slip as the Peterites were 6 down for 61 in the 16th over.

Kumara and Hemananda batted with great composure and their chanceless partnership ensured St. Peter’s put up a respectable score on the board. They added 174 runs for the 7th wicket as St. Joseph’s lost the plot with the ball. Skipper Kumara reached his hundred in the 49th over.

Chasing 246 runs to win, St. Joseph’s College lost Sahan Dabare in the very first over due to a mix-up in the middle, resulting in a run-out. However, the Josephian chase was bolstered with a record-breaking 147-run stand for the second wicket by Shevon Daniel and Sadeesh Jayawardene. The Josephian Captain Daniel was more of the aggressor, but he fell short of a well-deserved century, which triggered a collapse for the Josephians.

Jayawardene too perished as St. Peter’s came back into the game quite well. With a couple of quick wickets falling, St. Joseph’s required 70 runs to win in the last 10 overs with 6 wickets at hand. Dunith Wellalage and Hiran Jayasundara kept St. Joseph’s in the hunt, despite the required run-rate nearing 9 runs per over.

However, the Peterite spinners were superb towards the end of the Josephians innings, especially Niman Umesh and Shennon Rodrigo, who ended with 3 wickets apiece as St. Joseph’s middle order faltered in the second half of their innings.