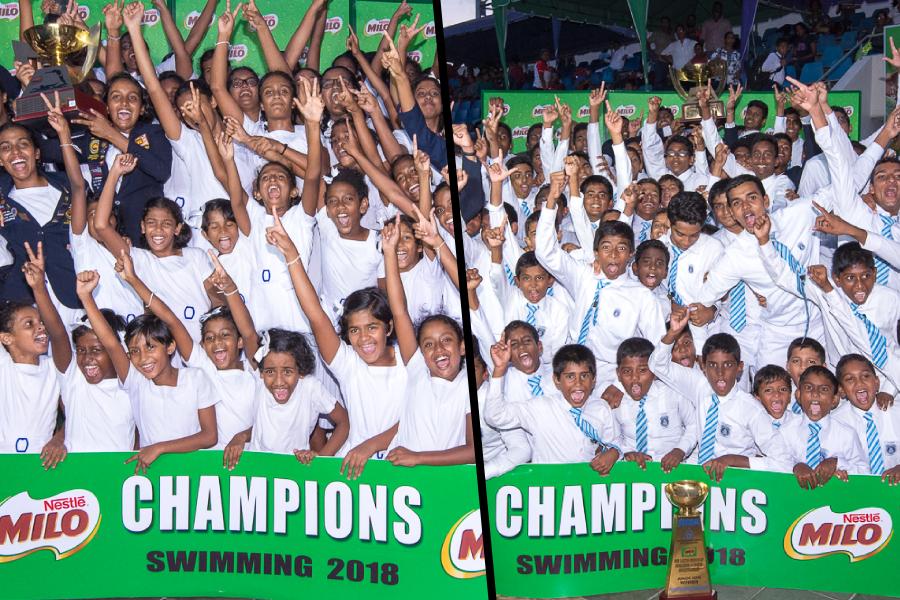 St. Joseph’s College and Mahamaya Girls College Kandy proved to be invincible, once and for all, as they retained the coveted Schools Swimming Championship for the 15th and 20th time respectively.

5 long days, each with displays of unbelievable talent, top sportsmanship and record breaking performances saw end to the most celebrated schools swimming event in Sri Lanka, the 45th edition of the All Island Milo Schools Swimming Championship 2018.

Visakha’s valiant effort fell a mere 4 points short of victory, which was decided in a final two, nerve wrecking relay events. With all at stake, Mahamaya Girls College overcame what turned out to be a spectacular series of events to remain unbeaten for 20 long years setting a record of its own. 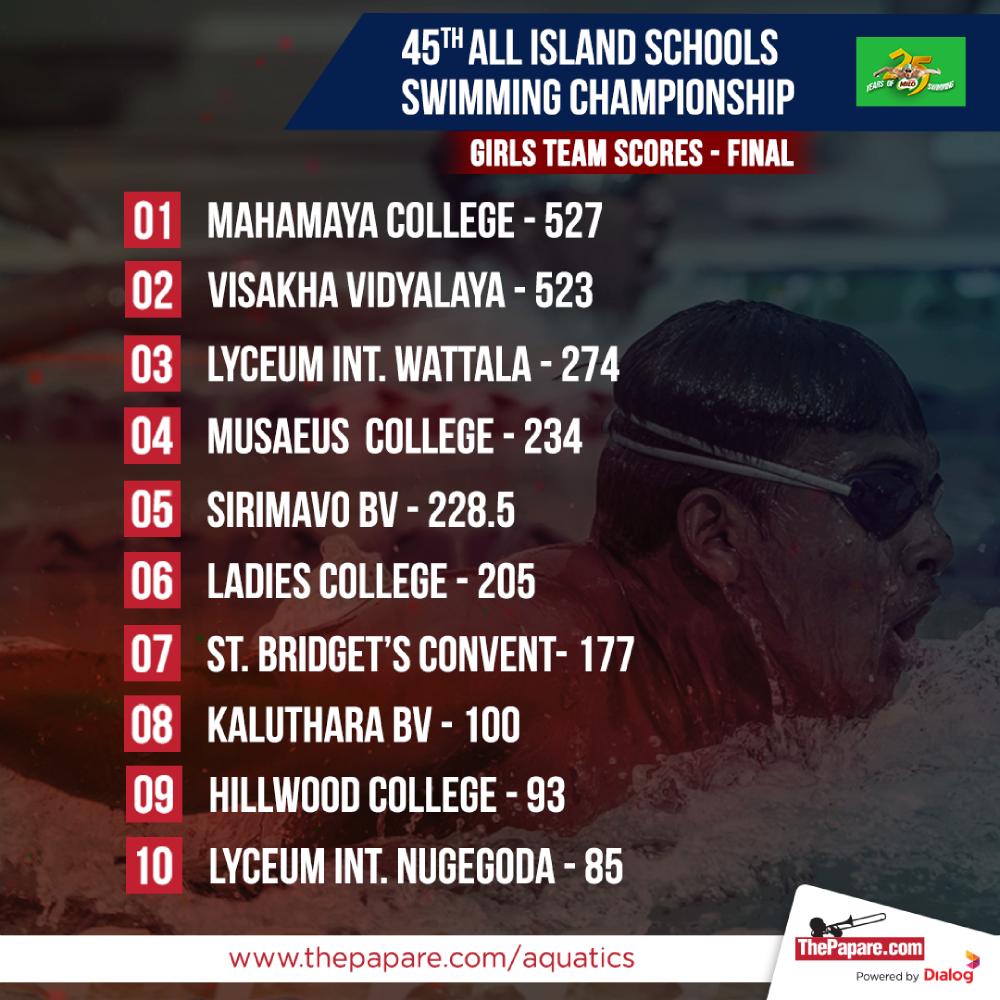 The senior squad of Visakha Vidyalaya finished 83 points behind the mighty Mayans to collect 343 points in the senior girl’s division. With 182 points, Ladies College had to settle for a bronze place finish.

St. Joseph’s College has been a dominant force right throughout this year’s meet, maintaining a steady lead at the top of the leaderboard. A successive joint effort by the junior and senior squads of Joes swimming, they claimed the Overall Boys title with a whopping 607 points on the board. 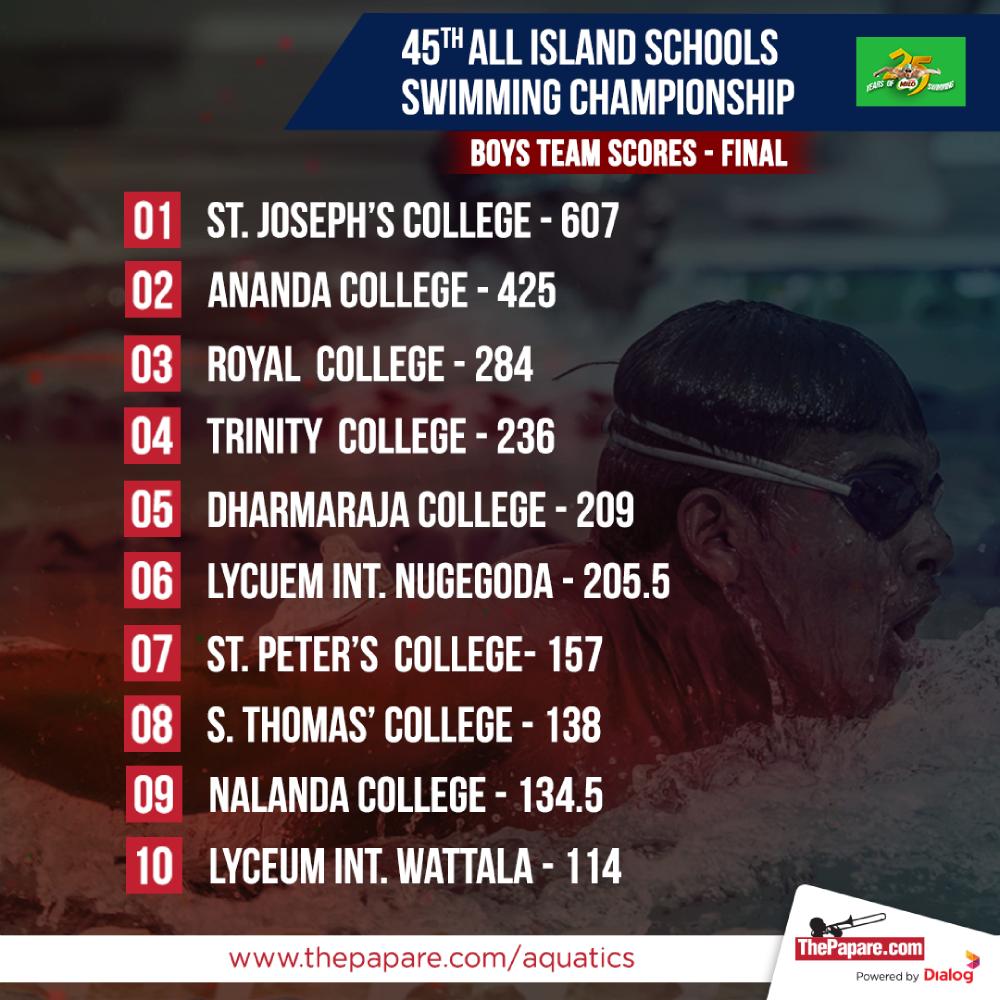 St. Joseph’s College made it a one man show winning both the junior and senior division in the overall tally. The junior squad scored 196 points adding to their 607 overall winning total while the seniors put up the remaining 411 points.

Nabashi Perera of SBBV, Ramudi Samarakoon of Visakha Vidyalaya, Chris Pavithra of LISN and M Ekineligoda of Ananda College were the highest individual point scorers for their respective schools, each contributing 45 points with 3 new meet records to their names.

225 points of their 527 total came out of the Girls Under 17 team event for Mahamaya Girls College. Visakha Vidyalaya tops the under 15 girls with 122 points and the under 19 girls with 181 points. Likewise, St. Joseph’s College claims two wins in the under 13 and 17 events with 113 and 193.5 points respectively.

Doing what they do best, Bishop’s College Colombo took home the overall Girls Diving Championship for 2018 with 119 points. St. Bridget’s Convent came in 2nd with 97 points while 34 total points put Lyceum International College Wattala in the 2nd runner up position.

Royal College took home the Boys Overall Diving Shield with a whopping 208 points in total. Thurstan College claimed second far behind the champions, with 39 points on the board. Divers of S. Thomas’ College had to settle for 3rd place with 31 points.

Celebrating 25 years of schools swimming, Milo Sri Lanka hosted a first of its kind legends swimming carnival. Gurus of Sri Lanka swimming, national and international representatives took to the pool to show the juniors how they used to do it back in the day. Nishantha De Costa, Mahi and Julian Bolling were among the16 greats that took part in the wonderful send off event.