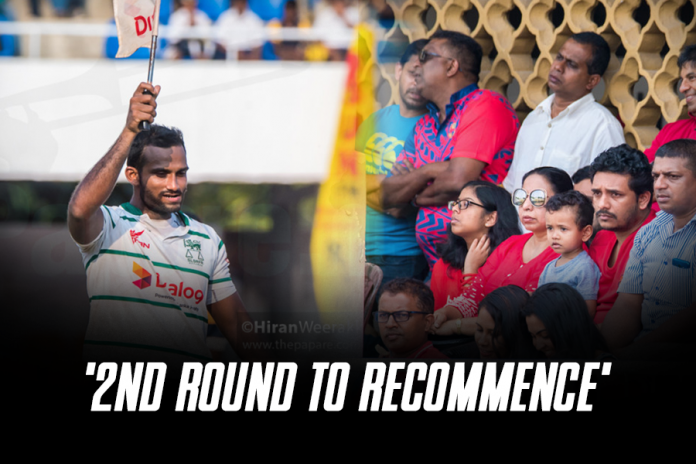 The 2nd Round of the Singer Schools Rugby League 2019 is set to recommence as the Sri Lanka Schools Rugby Football Association (SLSRFA)  has been given the go ahead by the Ministry of Education and Ministry of Defense.

Following the terror attacks on April 21st, the island’s most competitive schools tournament, the Singer Schools Rugby League, was forced to be put on hold for the safety of the players, fans and general public.

The Sri Lanka Schools Rugby Football Association (SLSRFA) then forwarded their proposition to the Ministry of Defense and waited for their clearance to proceed with the Singer Schools Rugby League.

“I have spoken with the Minister of Sports, Harin Fernando and he has provided his fullest support to recommence the competition and I have forwarded our request to the defense ministry for clearance” stated the President of the SLSRFA, Ranjith Chandrasekara speaking exclusively to ThePapare.

The SLSRFA has now got the green light by the relevant authorities to recommence the league on June 1st at neutral venues, after thorough security checks, clearances and several consultations took place.

The remaining games will be carried out at Colombo and Kandy amidst heavy security. The matches hosted by the Colombo Schools will be played at the Sugathadasa Stadium and the Kandy Schools will make Bogambara Stadium their home, except for the two Bradby games, where the venues will be Pallekele and Royal Complex, respectively.

According to the plan by SLSRFA, the Division 1 Cup and Plate Championship matches will be played on Saturdays and Sundays starting from 9.00am. The Bowl, Shield and Division 2 games will be worked off on Wednesdays, Thursdays and Fridays at the same times.

The League is set to conclude on the 30th of June and will be followed by the ‘Presidents Trophy’ knock-out tournament which is scheduled to kick off on the 6th of July. The Finals will be played on the 20th of July as all games are said to be played at Sugathadasa Stadium.

The revised fixtures will be announced shortly.

Stay logged with ThePapare.com for the latest updates and news

2nd Round ready to kick off

Schools Rugby – Team of the 1st Round