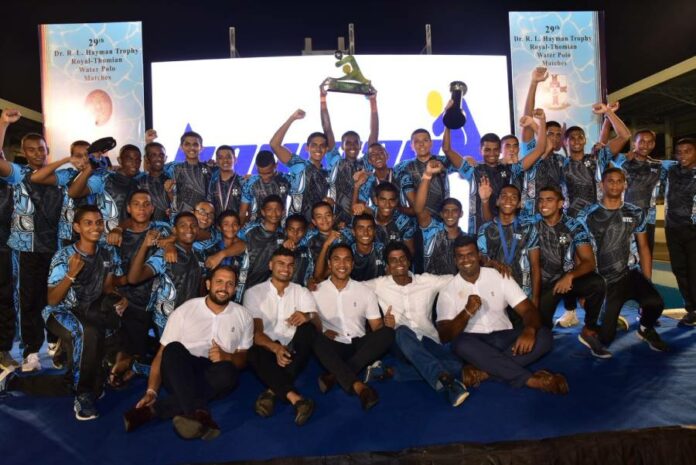 S. Thomas’ College Captain Dirhean Dias was named the Most Valuable Player of the encounter for his exceptional performances throughout. He scored 5 goals in the 1st leg as well as 2 goals in the final game, for his school. Dias was awarded the Royal College Group of 92 Challenge Trophy.

Into the 2nd leg of the encounter, S. Thomas’ College won the first swim ball. However, none of the schools were able to score any goals until Mihin Wanigasekara opened the score for Royal 3 minutes into the clock, making it the only goal for both teams in the 1st quarter.

Yumal Bollegala won the 2nd swim ball for Thora, and Captain Dias opened the score for S. Thomas’ College just like last week, with 4 mins and 48 seconds left in the quarter.

Just about 30 seconds after their 1st goal, Migara Gurusinghe scored the 2nd goal for STC, taking advantage of Royal’s defense and making the goal open for him.

Yumal Bollegala scored his 1st goal of the evening which was also the 3rd goal for STC, making it 3 all at halftime.

Once again, the swim ball was won by the Thomian side, but Banuka Jayathilake made his 3rd goal then, lifting the score to 4 goals for Royal.

Just 15 seconds afterward, STC Captain Dias scored the 4th goal for STC as a response to Jayathilake’s goal for Royal.

Thomian cap number 04 Aaqil Zuhair made a show and scored the 5th goal for his team.

Not letting the Thomians get ahead, prop Yasandu De Silva scored the 5th goal for Royal with a rebound.

The 6th goal for S. Thomas’ was scored by Chariya Krurukulasuriya with a backhand shot.

Striking again, it was Zuhair showing his talent in scoring the 7th and the 8th goals for STC.

The 3rd quarter of the game brought energy to the water and the scoreboards, making it the quarter with the highest number of goals scored compared to the 1st 2.

S. Thomas’ side proved their speed by owning the 4th and the final swim ball of the game.

The unselfish pass from Bollegala to Kurukulasuriya added another goal to the Thora scoreboard, making it 9.

Thomian cap number 03 Santhush Kalansooriya scored the 10th goal for his school, making his 1st goal in the encounter.

Then Bollegala, catching his rebound, scored the 11th goal for STC.

Royal Captain Umindu Katugampala, making his first goal in the game, lifted the Royal score from 5 to 6 with 3 minutes and 43 seconds remaining in the game.

Kurukulasuriya made his 3rd goal for the day by scoring the 12th goal for STC.

With a nice move by Yamith Jayakody, Royal scored their last goal for the encounter, making their score 07.

The Under-15 encounter for the Mahinda Liyanage Challenge Trophy was won by Royal College, with a close call of 01 aggregate goal difference. Though Royal College won the 1st leg with a 2-point lead, making the score RC 12 – STC 10, the spirit of the young Thomians made the score RC 10 and STC 11 in the 2nd leg. However, the aggregate score was RC 22 and STC 21.