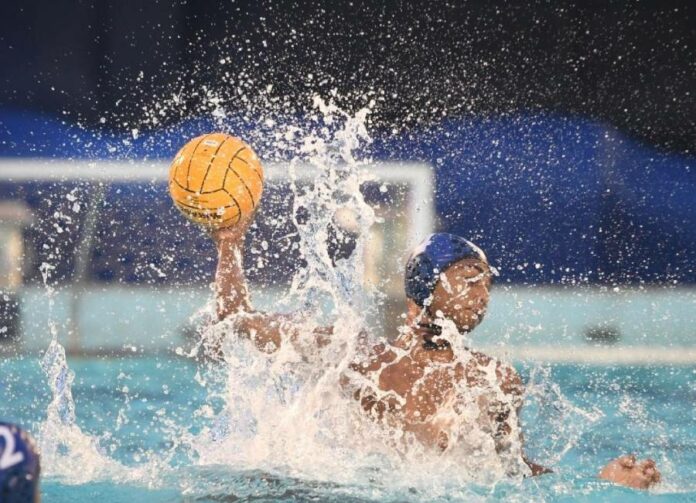 With spectacular performances, Thomians took the lead in the first leg of the 29th Dr. R. L. Hayman Trophy held today, the 1st of October, at the Sugathadasa Swimming Pool Complex. Thora scored 23 goals against Royal College, only allowing them to score 10 goals.

It was a very rapid paced game with the Thomians dominating the arena on both offensive and defensive sides.

In the first 22 seconds of the game, Umindu Katugampala of Royal, performing his Captaincy duties, scored the first goal of the game with a backhand shot.

Not too long after the 1st goal of Royal, Thora Captain Dirhean Dias scored the first goal of his team after some well-coordinated passes among his teammates.

Cap number 04, Yasandu De Silva of Royal College, scored the 2nd goal for his school at the end of 3 minutes and 15 seconds of the first half.

Not being second to Yasandu, Aaqil Zuhair, the right wing for S. Thomas’, scored the 2nd score for his school.

With only 12 seconds to reach the 4th minute of the game, the Thomian Captain Dias showed good game awareness by taking a nice shot through the bars to the goal, scoring the 3rd goal for his school.

At the start of the last minute of the first quarter, Banuka Jayathilake of Royal College scored the 3rd point for RC, matching the score to 3-3.

At the end of the 1st quarter, both schools managed to score 3 goals each.

Though Jayathilake of Royal College won the swim ball at the beginning of the 2nd quarter, Thomian cap number 08 Yuman Bollegala scored the 4th goal.

The time at which the goal of Zuhair updated the score to RC- 3 and STC – 5, is around when the Thomians started to get hold of the game.

Striking again, it was Bollegala scoring the 6th goal for Thora. The last 2 goals of team Thora were achieved through good defensive playing.

Not wanting to give up easily, Royal Captain Katugampala scored the 4th point for Royal with a spectacular bounce to the corner just when the Thomians relaxed.

Missing 2 hits by bouncing back by the bar, Zuhair made it right through his 3rd attempt, making Thora score 8 goals and brought up his personal total to 4.

The Thora Captain Dias then struck his 3rd goal, making it 9 for the school.

Royal made their 5th goal after 5 consecutive goals from Thora.

Similar to Zuhair a few minutes earlier, Royal were unable to get through the goal twice because of high-end goalkeeping by Seevali Gurusinghe for STC, but scored their 4th goal in the 3rd attempt.

Bollegala made it 11 for Thora, with only 30 seconds to half-time.

With a comfortable lead by the Thomians, it was STC – 11 and RC – 5 scores at halftime.

The swim ball in the 3rd quarter of the encounter was won by the Thomians with the side change.

Within 40 seconds of the start of the new quarter, Thomian Bollegala scored the 12th goal with a good faking to the opposing goalie.

Dimeetri Liyanage showed his confidence by scoring the 6th goal for Royal, the first for him.

Not letting Royal lift their heads, Kurukulasuriya of STC made his first goal for the school this year, making it 13 for STC.

Bringing some joy to the crowd, Royal Captain Udugampola earned a point to the school by his brilliant backhand shot, making the scores to STC 13 and Royal 8.

Taking turns with Zuhair, Bollegala scored the 14th point for STC while a few seconds later it was Captain Katugampala striking the 9th goal for RC.

Finding the small space between the nearby post and the goalie, STC scored its 15th goal.

Bollegala, with his wonderful technique and excellent shot, made the 16th goal for STC.

S. Thomas’ College won the swim ball of the last quarter of the evening, and after 1 minute and 48 seconds gone with a pass from Zuhair, Captain Dias took the 17th goal for STC.

Picking up the rebound from Dias, Zuhair made STC 18 on the scoreboard with 5 minutes and 34 seconds to go on the clock.

Zuhair proved he was the star shooter of STC as he scored the next 3 goals: the 19th, 20th and 21st goals of STC.

Damsara Akmeemana of Royal College took the last goal for Royal for the day, bringing the total to 10, with 1 minute and 17 seconds to end the game.

Kurukulasuriya, the center forward, took the 22nd goal for STC.

Just as he scored the first goal for his team, Thomian Captain Dias scored his team’s last goal as well, with 23 seconds left on the clock.

Royal College owned the best individual shots of the game: however, the Thomians made it a nightmare for Royal College by proving their team spirit through their lead of 13 goals.

The 2nd leg of the 29th Dr. R. L. Hayman Water Polo encounter will be held next Saturday, the 8th of October 2022, at 5.00 pm at Sugathadasa Swimming Pool Complex.

Big win for S. Thomas’ College as they regain the Dr....