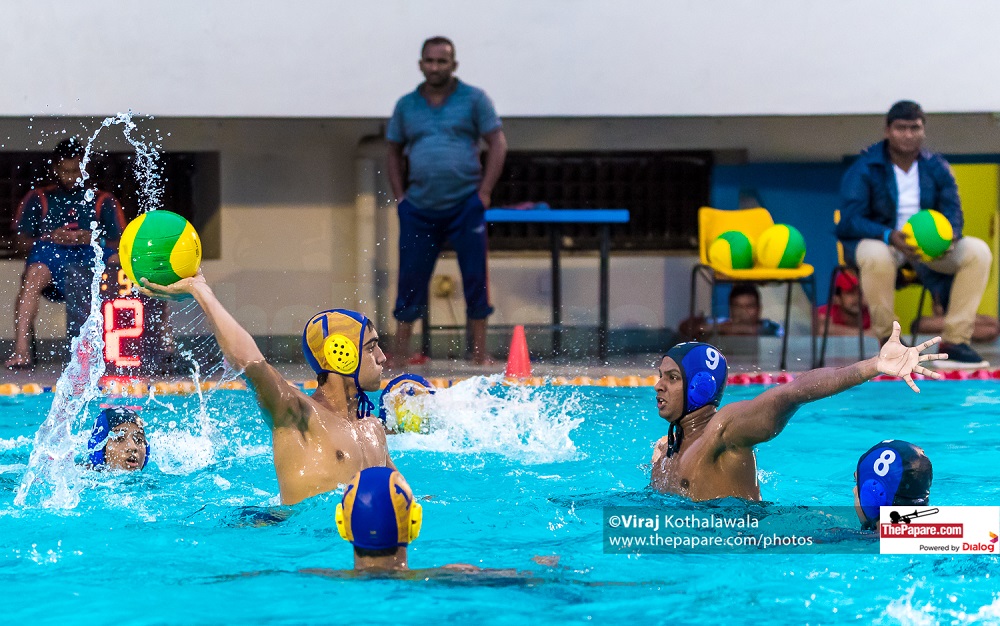 The premiere Water Polo encounter in Sri Lanka’s sporting calendar kicked off after a short delay as torrential rain continued to pelt the Sugathadasa stadium.

S. Thomas’ showed initiative right from the get-go, winning the swim ball and then proceeding to open the scoring immediately through Shevaan Ebenezer to make it 1-0.

S. Thomas’ made it 2-0 shortly after when he shot into an open goal from the right side after Royal saw their first exclusion in Akthar Jaffer.

Jaffer was influential as Royal halved the deficit off the second phase of a corner ball.

Royal grew into the game slowly as Omila Lokuge levelled terms after which Jaffer then put the Reid Avenue side in the lead as he latched onto the rebound off of Thomian Goalie Saviru Wijesinghe.

The conditions continued to play their part with a ricochet off a venomous Ebenezer shot leading to terms being levelled once again.

Royal started with urgency as Akthar Jaffer set things in motion, lobbing into the Thomian goal to make it 4-3.

Royal Skipper Dissanayake, who expected to dominate at Prop, struggled as he was often stranded with two men marking him, but basic mistakes by the Thomians meant that opportunities continued to call for the Royalists.

Omira Lokuge and Savinda Dissanayake latched onto the errors to score a quick-fire double to make the scores 6-3. STC then managed to pull one back as Ebenezer slotted home a penalty earned by Gehan Wijesinghe.

With the half ticking away, Savinda Dissanayake restored the lead for his side, muscling off his two markers to fire home from close range.

S. Thomas’ came in full guns blazing at the half with Wijesinghe capitalizing on a lazy Royal defense to bundle home.

As STC committed more men forward to overturn the deficit, Savinda Dissanayake took the chance on the break to make it 8-5.

S. Thomas’s continued to commit to the offensive and grabbed two goals from the left bar through Saai Syvendra and Randeev David but saw Akindu Handunpathirana hit back with a goal from the left of his own.

With the clock running down and Skipper Manula Wickramarathne excluded, his replacement Akhil Zuhair made it 08-09, giving the momentum heading into the home stretch.

Shevaan Ebenezer then opened the 4th quarter the same way they ended the third, levelling the scores from close range.

Omira Lokuge, who was the dynamo in the Royal team then took the initiative and restored Royal’s lead; Dulvin Dahanayake made it 11-9 shortly after.

Dhiren Dias’ goal from the right wing set alarm bells ringing in the Royal camp with the Reid Avenue side committing all men to the attack.

Gehan Wijesinghe took advantage of a committed Royal attacks and made the scores level on the counter attack.

As both sides tired out, 2nd year Coloursman Aaqil Fairoze took charge of proceedings and scored a brace of goals, the first a venomous shot and then a beautiful lob that went in and out of the goal.

Savinda Dissanayake then wrapped things up, making it 14-11, giving Royal a decent lead heading into the second leg.

Omira Lokuge was adjudged the Man of the Match of the first leg.