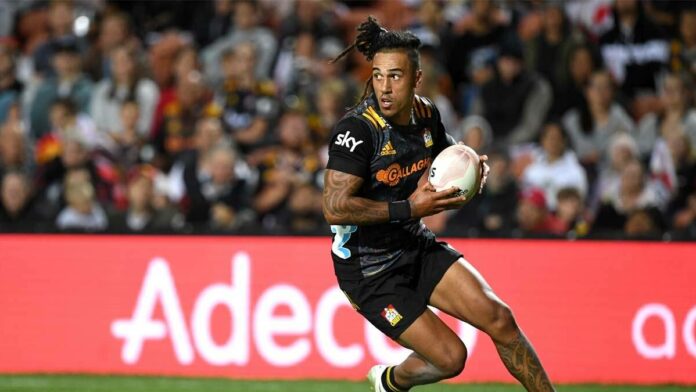 Chiefs, Bay of Plenty and Maori All Blacks star Sean Wainui has died in a car crash in Omanawa, near Tauranga, on Monday.

Bay of Plenty police said in a statement that one person had died after crashing into a tree at McLaren Falls Park.

It was confirmed that Wainui, who was the driver and the sole occupant of the car, died at the scene at about 7:50am.

The Serious Crash Unit and two ambulances attended the scene, and enquiries into the circumstances of the crash are ongoing, with the Tauranga City Council announcing the park would be closed for the day.

A 25-year-old utility back capable of playing on the wing and in the midfield, Wainui played 53 games for Taranaki between 2014 and 2020 before shifting to Bay of Plenty this year.

In addition to his three appearances for the Steamers this season, he also played 44 games for the Chiefs since 2018, and played nine times for the Crusaders in their Super Rugby-winning season four years ago.

Wainui also made his international debut for the Maori All Blacks against Fiji in 2015 and made 10 appearances for the side, including two against Manu Samoa earlier this year.

He was part of the New Zealand U20 team that won the U20 World Championship in Italy six years ago.

In June, he scored five tries in a Super Rugby Trans-Tasman victory over the Waratahs, the first player to ever do so in Super Rugby history.

In a statement released by New Zealand Rugby, chief executive Mark Robinson passed his condolences on to Wainui’s wife Paige and their two children Kawariki and Arahia, as well as the wider rugby community in New Zealand.

“Our thoughts are with Sean and his whanau, particularly Paige, Kawariki and Arahia, and we offer them our full support at what is the most difficult of times,” Robinson said.

“We know Sean’s passing will be felt deeply by everyone involved in rugby, particularly his Bay of Plenty and Chiefs teammates, and we share their sorrow and their shock.

“We ask that media give the Wainui whanau space to grieve as we all reflect on a young life that has ended far too early.”

Maori All Blacks and Chiefs head coach and former Bay of Plenty boss Clayton McMillan was heavily involved in Wainui’s playing career and said he will be remembered fondly by his peers for his contributions to rugby and te ao Maori.

“Sean was an incredibly talented individual and held a great amount of mana among his fellow teammates and the wider rugby community,” McMillan said via a statement.

“He epitomised everything you could possibly ask for in a player. He will be remembered for being a passionate, hard-working, proud Maori who was an exceptional player but more importantly father and husband.

“He was an influential member in the teams he has been a part of, and his presence will be missed.

“Our sincere condolences to Paige, Kawariki and Arahia and his wider wh?nau at this difficult time. We are offering them our full support along with our players and staff.”

Former All Blacks star Sonny Bill Williams, meanwhile, is among the many who have taken to social media to pay tribute to Wainui.

“My thoughts are with Sean Wainuis’ [sic] family,” Williams posted on Twitter. “Especially his wife & young child. Although I didn’t play alongside him, I could always feel his mana coming up against him as his opposition.”