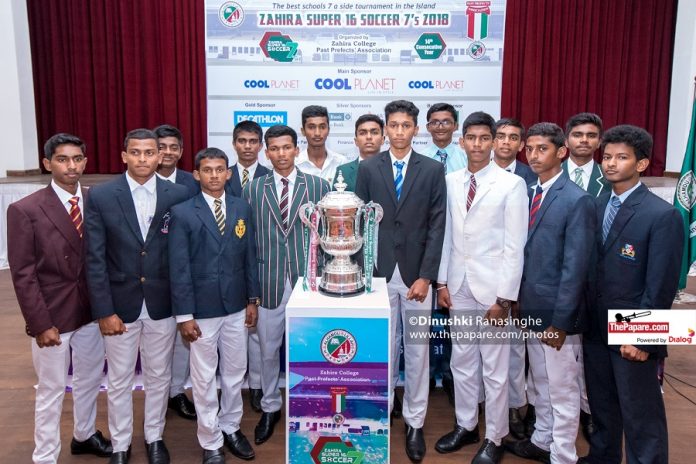 The 14th Zahira Super 16 Soccer 7s organized by the Past Prefects Association of Zahira College will be held on Saturday 6th October 2016 from 8.30am onwards at the Race Course International Stadium, Colombo.

Zahira College, Colombo is a school who have excelled in Football for the last ten decades and easily contributed to the sport in National level by producing players and coaching staff. Zahira College is the most prominent school in Football in Sri Lanka by arguably winning the most amount of championships for the last few decades.

16 football playing schools from the country will be a part of this prestigious tournament for the 14th time where the youngsters will get chances and opportunities to showcase their talents, skills and abilities in football on a larger scale.

Shorter formats of any sport bring a lot of excitement to the spectators. This time the format will be at 7’s format where excitement and thrilling factor of football will be a treat to watch which will eventually pull more crowd attraction towards the tournament.

The tournament will consist of four groups and will be played on a league basis and teams will proceed to the next round based on placing in the first round. Teams will be drawn into four categories in the second round, namely Cup, Plate, Bowl and Shield championship.

The Football Federation of Sri Lanka (FFSL) announced that …

The Organizers take great pleasure in announcing that Cool Planet, who has been always supporting the Past Prefects Association of Zahira College will be the main sponsor with many others backing them to make the event a success.

The Cup winner will receive a cash price of Rs. 50,000/- and total cash rewards and awards of Rs. 650,000/- will be on offer for participants. Incidentally this is the only school level football tournament with cash prices on offer.

All the 16 participating teams will be powered by 16 prominent brands in the island. The teams and the company’s that has powered the respective school are listed below.