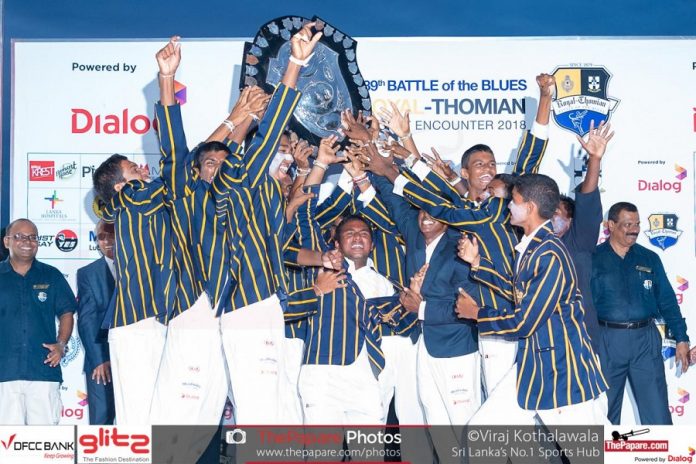 The Royal – Thomian, a tradition worth 140 years has earned a special place in many families. Since its inception in 1879, it has been a tradition for certain families to take part in the event while passing on the pride to the next generation. For these families, the ‘Royal – Thomian’ has been deep rooted, becoming a household affair.

There are more than 30 instances of both father and son playing for Royal with the latest being Ronuka Jayawardene son of Rochana Jayawardene, a well-known name in Royal-Thomian folklore for almost single handedly taking them to victory in 1983.

Other famous names include G. Heyn and Bertram Heyn. The famous Ceylonese Cricketer Bertram Heyn was known for taking Don Bradman’s wicket in his last visit to Ceylon during the All Ceylon vs Australia unofficial Test match at Colombo in 1948. He later served as the commander of the Ceylon Army from 1966 to 1967.

Hardly anyone can forget Sumithra Warnakulasuriya’s marathon 197 in 1980 which is also the series record for the highest individual score. His son, D. Warnakulasuriya represented Royal in 2007.

There are few rare instances where brothers have captained the teams at the Royal – Thomian. Churchill Gunasekara’s brother E.I. Gunasekara captained in 1906 while F.C. de Saram’s captaincy in 1931 was followed by the captaincy of his brother F.R. de Saram in 1932. T. Nirmalingam, brother of the 1948 captain T. Parathalingam, led the team in 1954. Ajitha Pasqual’s brother Sudath Pasqual played in the 1979 centenary encounter for Royal. In the same year he was selected to represent the national side at the World Cup, thus becoming the youngest ever to play in an ODI for Sri Lanka. Later in 1980 he led the Royalists at the big match. Ajitha Pasqual captained in 1973.

The encounter has witnessed over 50 instances where brothers of the same family took pride in wearing the Blue & Gold Blazer. Among them are D.W.L. Lieversz (Snr) and his brother E.G.L. Lieversz who played between 1925 and 1927. E.G.L. Lieversz’s son E.C.L. Lieversz led the winning team in 1969.

Dai Pathmanathan’s brother, late Gajan Pathmanathan played for college between 1971 and 1972. Later he represented both the Oxford and Cambridge Cricket teams, which is a unique, extraordinary feat. Dai Pathmanathan’s son, Devind led the Royalists to victory in 2013.

C.E. Corea’s grandson N.D.P. Hettiaratchy played in 1969 and 1970, a rare occasion where the grandfather and the grandson both played for Royal. C.E. Corea, who played from 1882 to 1885 was involved in the infamous 9-run match.

Turning to the Thomian camp, Premalal Goonesekara (1964) and Suresh Goonesekara (1992) hold the distinction of being the only father-son combination of captaining S. Thomas’ at the Royal-Thomian.

The first prime minister of independent Sri Lanka Hon. D.S. Senanayake played in the Royal-Thomian in 1901 and 1902 while his sons Dudley Senanayake (1927-29) and Robert Senanayake (1928-32) too had the honour of representing S. Thomas’.

Former Test captain Duleep Mendis, who also led Sri Lanka to their first test victory in 1985, captained the Thomians in 1972. During his career from 1970 to 1972, he scored two centuries including the record score for a two-day Royal-Thomian encounter: 184 in 1972. Twenty years later, his nephew Manoj Mendis (1991-94) scored two consecutive centuries (in 1992 and 1993) sealing the only occurrence where two relatives scored consecutive centuries. Manoj Mendis also captained in 1994. Duleep Mendis’s son Sanjeev Mendis (2003-05) was Vice-captain of the S. Thomas’ side in 2005.

There are two instances of brothers captaining S. Thomas’ at the Royal-Thomian. Paikiasothy, Manicasothy and Saptaranajyoti Saravanamuttu captained the Thomian camp in 1914 and 1918 respectively. Sasi Ganeshan, the Thomian skipper in 1976 was followed by the captaincy of his brother Ajith Ganeshan in 1977. Ajith Ganeshan acted as deputy in 1976.

Some families carry the rare distinction of representing both schools, resonating the strong bond between the two institutions.

Without doubt, these families have carried the Royal-Thomian tradition in their blood, passing it on from a generation to another. They have established the rich history of a 140-year old heritage that has created one of the greatest rivalries in Sri Lankan cricket and a strong brotherhood between two prestigious institutions.