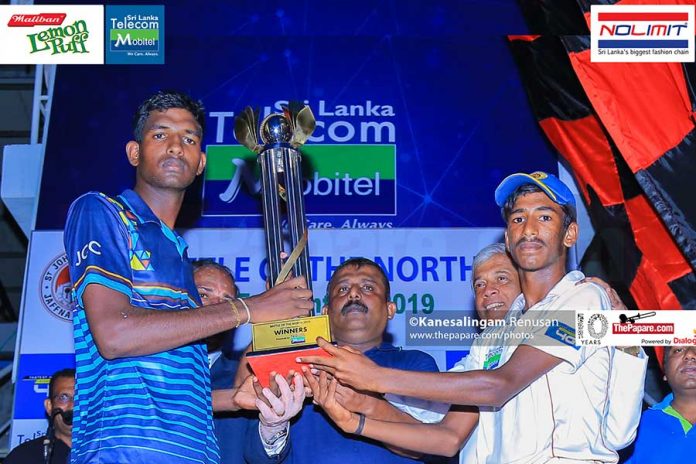 The day resumed with St. John’s College in a commanding position at 121 for no loss in their second innings. Openers Naganthirajha Sowmiyan and Chrsity Thanujan reached their half centuries but soon perished against Mathushan. He was in the middle of a fiery spell as he kept testing the batsmen with pace and seam movement. Together with Vijayakanth Viyaskanth, the pair rattled through the first five wickets and shifted the momentum towards the home side.

However, the defiant 6th wicket stand and few gritty knocks at the back-end helped St. John’s College post 245 for 9 in their 2nd innings before they finally decided to declare. A target of 232 runs were given to the hosts to get in just 40 overs in the final session. The openers did not show much urgency but kept a steady run rate in their half century stand. But after the loss of 3 wickets, with their skipper Mathushan at the crease, there was real sense of intent from the Central lads.

Mathushan came out all guns blazing as he stroked the ball all around the park. His long limbs were put to good use, as he put 4 over the rope and found the fence 5 times in his 36-ball knock of 65. He almost made a match out of nothing but, he wst johas dismissed by Murfin Abinash and that halted the run chase.

It turned into, just the matter of seeing off the final few overs, without losing anymore wickets for the home side. They managed to do just that and ended at 176 for 7 at stumps on the final day