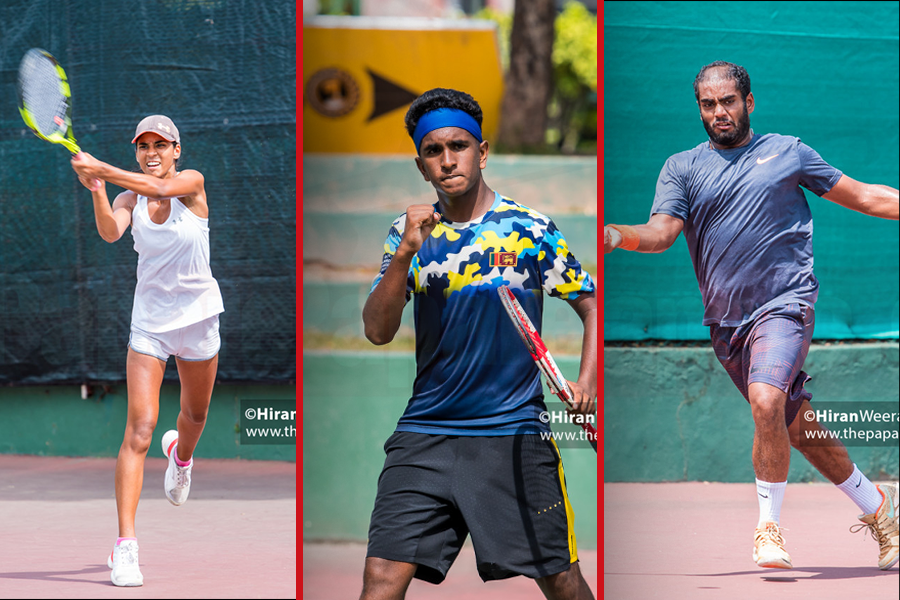 Two weeks of nonstop racketing across 31 different events, over 600 participants in action to become the islands best, the 103rd Sri Lanka Nationals Tennis Championship was a treat to the eye.

Some retained their national glory, some carved their names onto the head boards, some walked away with new experiences and some faced dismay in loss. All in all, it was a tournament to be cherished.

We take a look at some of the bigger moments at the 2018 Sri Lanka Nationals Tennis Championship.

Sharmal gets comfortable on the throne

Sharmal was a part of the quartet that traveled to Indonesia for the Asian Games 2018 and was hot off international exposure. He was up against Dineshkanthan Thangarajah, a veteran in the game and holder of 5 National titles of his own.

A heated clash on a Saturday morning crowned Sharmal Dissanayake the 2018 Men’s Open Champion, a title he is no stranger to. He will continue his reign from 2016 and will end the year at the top of the Men’s leaderboard.

This was Sharmal’s second win in the tournament as he also bagged the Men’s Doubles title along with partner Alex Fairbanks. The pair defeated Thangarajah and Heera Ashiq in straight sets in the final.

The 2017 Girls’ Junior National champion and Open Runner up, Anika Seneviratne has had a stellar 2018 with a few major wins under her belt. She ruled on clay at the inaugural Clay Court National Tennis Championship, winning the Women’s Open Singles title and was also a part of the Asian Games Tennis contingent.

Anika made her way into the Women’s Singles Final against the Girls U14 and U16 champion for this year, Anjalika Kurera. In a breezy first set and a tightly fought second, Seneviratne clinched her maiden Women’s Open Singles title.

This was the cherry on top to her triple title run at this years’ Nationals; She partnered sister Alana Seneviratne to clinch the Women’s Doubles championship and teamed up with Dineshkanthan Thangarajah to claim the Mixed Doubles title.

Anjalika Kurera has had a busy but fruitful year in the circuit so far. She was the top pick for the Asian Games with her impressive performances at the Colombo Championships and the SSC Open a few months back, where she won title.

The youngster made it all the way to the final of the Women’s Open Singles category, eyeing a fairytale maiden title win. However, Seneviratne’s power proved too much for Anjalika to overturn this time around and she had to settle for a second-place finish.

She didn’t go home empty handed however, her dominance prevailed in her pet events, the Under 14 and Under 16 competitions, where she won both titles.

Nelaka Dissanayake was crowned the Boys’ U14 champion of the 103rd Junior National Tennis Championship. He made his way to the final in a draw of 128 applicants, as the third seed, and had decent wins along the way.

Dissanayake opposed second seed Apna Perera in the semifinals and top seed Anuth Wijesinghe in the final. Creating a major upset, Nelaka came out victorious over Wijesinghe with a clean sheet, 6/0, 6/0.

Nelaka partnered Chathurya Nilaweera in the Boys’ under 16 doubles event and took home his second gold. The pair defeated Dhilvan Herath and Shivendra Perera in a close straight set final.

Chathurya Nilaweera was the stand out performer in the Boys Under 16 category, bagging the singles to complement his doubles win. Seeded 8th in the tournament, Nilaweera dug deep in a draw of 64, defeating top seed Rakesh Ratnasingham in the quarters and partner Nelaka Dissanayake in the semifinals.

He defeated Luca Knese, the second seed for the tournament, in a cracking three setter in the final clash, to take home the silverware.

Trophies galore for Savini and Savith

Much like Chathurya, Savith Weerasinghe started small as the 8th seed in the draw. Weerasinghe robbed Nilaweera of his third gold, when he came out with a three-set thriller in the final, to claim the Boys’ Under 18 title. Weerasinghe also took home as second place finish in the Boys Under 18 doubles department partnering Dhilvan Herath.

Savini Jayasuriya made a statement herself in the Girls’ under 18 category with a fabulous run. The youngster was only made to sweat by Oshini Herath in her semifinal match, which she overcame in straight sets, and challenged top seed Janali Manamperi for the championship title.

Jayasuriya had to bring down the hammer on her compadre and doubles partner to claim her stake in the Junior National Girls’ title. The duo made their way to the Women’s Doubles finals and had to settle with a Runner-up finish, with Alana and Anika Seneviratne taking home the gold.