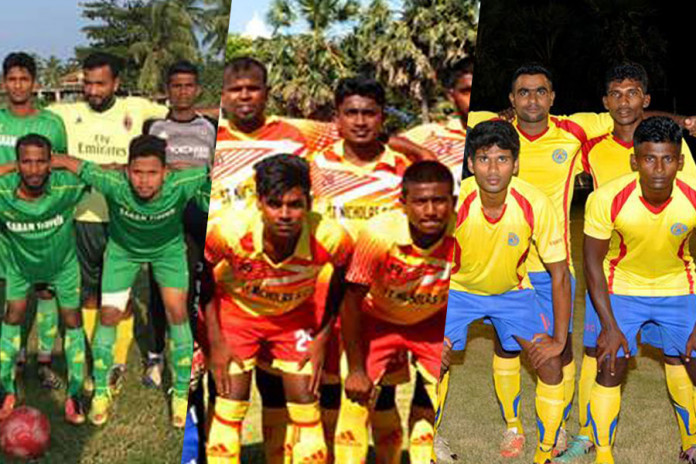 St. Nicholas SC became the second team from Jaffna District to get selected to the 4th round of the FA Cup when they comfortably beat Al Hira with the score line of 4-0.

It was Al Hira who started the match in a positive way as the pace of the boys from Wennapuwa troubled St. Nicholas SC, who didn’t find a proper answer to the short passes and nifty through balls of Al Hira.

However Al Hira did not make the good start count as their forwards Mohamed Shaheeb and Sampath missed many opportunities.

Pouncing on it St. Nicholas’ Amilan put his team into lead when he smashed a goal on the rebound in the 35th minute.

Air Force SC in a merciless performance slammed 13 goals past a hapless Reliance SC side in the 3rd round of the 2016/17 FA Cup match played at the Kelaniya Football Complex.

In the dying stages of the first half, Ajanthan scored the second goal for St. Nicholas when the Al Hira custodian made a blunder on his part.

The second half was more or less a mere formality as Al Hira looked listless after the two hefty blows. St. Nicholas’ Roshan pounced on another error from the goalkeeper and scored the third goal in the 59th minute.

The match lost it liveliness after that although Rathees got his name on the score sheet when he scored a goal in the 79th minute to end the proceedings.

Singing Fish SC, the semifinalists of the Premier League Division II made sure there was no heartbreaks in front of their own fans this time as they comfortably beat Jupiters SC 3-0.

Singing Fish started brightly displaying a flowing performance of football and always looked threatening to get the lead.

The moment arrived in the 30th minute when Jupiters’ Mohamed Abdul handled the ball inside his own penalty area which did not just earn a penalty for Singing Fish but also saw Abdul sent off with a red card.

Fernando stepped up and smashed ball into the back of the net to give Singing Fish the much deserved lead.

Even though Jupiters tried hard to find the equalizer with the ten men, Singing Fish made sure they went into half time with a lead.

Singing Fish doubled their lead as soon as the second half started as Captain scored a long ranger from outside the box in the 52nd minute. Jupiters’ goalkeeper mistimed his jump and it cost his team a goal.

Jupiters’ forward Mohamed Inshaf fought a lone battle as he tried to create magic on his own but Singing Fish custodian Ravjkumar made sure all the efforts were kept at bay.

Captain doubled his personal tally and put the match to bed in the 89th minute when he scored another goal and the match ended 3-0 in favour of Singing Fish SC.

It was dream comeback for the boys from Kalmunai as two late goals allowed Brilliant SC to beat Kurinjikumaran SC 2-1 in front of their home fans.

Kajarathan of Kurinjikkumaran started the match with a bang when he scored a goal in the 8th minute to give his side an early lead.

The first half didn’t pan out to be an interesting one after that as both teams looked out of touch.

Kurinjikkumaran somehow managed to keep the lead intact going into half time.

Kurinjikumaran started the second half brightly looking to double the tally but Brilliant SC absorbed the pressure and responded resolutely to keep the deficit to one nil.

As the time wore out, Kurinjikumaran looked weary and started to concede silly errors.

Pouncing on one such error, Mohamed Sajith leveled things in the 70th minute to set up an interesting end to the match.

Haaram of Briilliant SC completed the comeback in the 85th minute when he scored a goal for his team.

Kurinjikumaran looked shell-shocked not having an answer to what had happened or how they threw their game away into the hands of Brilliant SC.

Ribery ruled out of World Cup