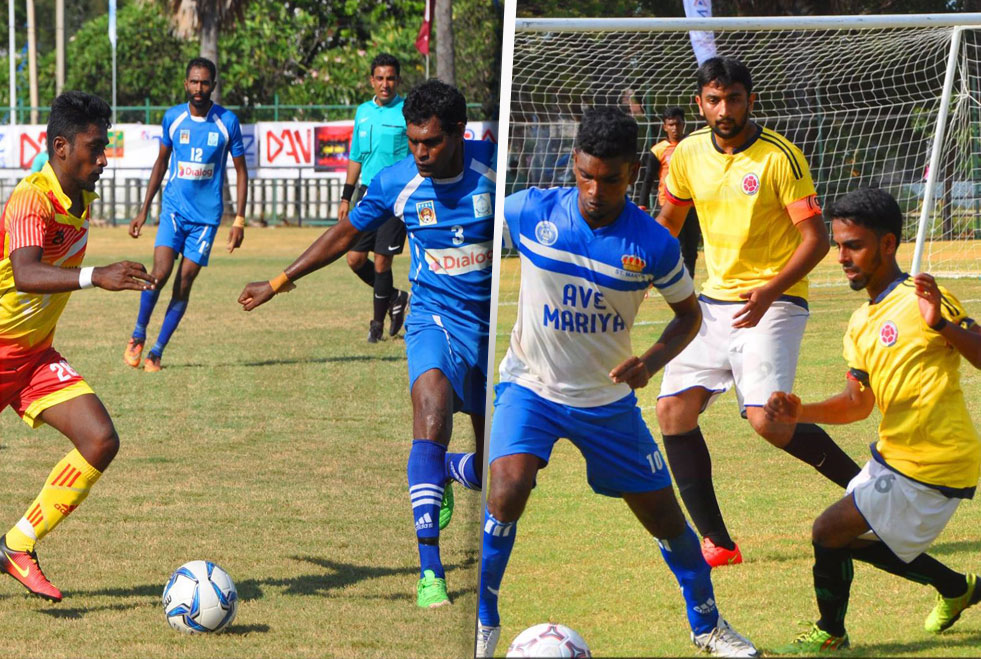 Home town favourites St.Mary’s SC entered the match on the back of a competitive 4-3 win against Liverpool SC from Puttalam. Meanwhile, Wimbledon SC also from Puttalam comfortably beat last year’s quarter finalists Hillary SC 3-0 in the previous round.

In front of a large number of fans filling the Stadium, Wimbledon started the game well and forced a couple of vital early saves off Sudharshan. Shaneer and Shareek were on target
for Wimbledon.

Air Force SC in a merciless performance slammed 13 goals past a hapless Reliance SC side in the 3rd round….

St.Mary’s scored the first goal against the run of play thanks to a stunning clinical finish from Nitharshan. The goal changed the overall context of the teams’ approaches.

St.Mary’s gained a stronghold after Ebiron beat the goalkeeper in a one on one situation and Nitharshan bagged his second. Jackson added to the worries of the visitors with another solo effort.

The rampage continued in the second half as Jackson scored his brace in the 55th minute. Anton Charles and Antony scored in the 59th and 62nd minutes respectively.

Regno and Dunad extended the goal tally to double figures. Nitharson completed his hat-trick in the 77th minute which was shortly followed by Regno’s hat-trick in the 80th. Wimbledon received appreciation for playing the game clean but there was nothing for them to show on the scoreboard.

Coach of St.Mary’s Stheesraj spoke to ThePapare.com after the final whistle;

“I am happy with the result. It was a great effort from the players. We are taking it game by game. Our ultimate goal is to win the rest of the games we face.”

Navy SC created the first chance right from the kick off, before St.Nicholas’ barely had a touch on the ball. Krishantha Perera’s shot was straight at the keeper. Perera followed up with an attempt that wasn’t executed well either.

Navy SC continued to stay on the front foot, keeping the ball for large phases of the game. Dammika Rathnayaka sent in a lovely ball to cut open the St.Nicholas’ defence and set up the chance but it went begging when Mendis failed to hit the target. On the other end, Amilan created back to back opportunities but nothing was converted.

In a ‘Round of 64’ FA Cup tie, Serendib SC overcame St. Joseph’s SC in a close encounter which was decided…

Perera’s header in the 25th minute off Rathnayake’s weighted delivery was the best chance of the half for Navy. Couple of chances went in the way of Pradeep Rodrigo but was defended well by the home side.

St.Nicholas’ found their feet against an established Navy side towards the end of the first half. Roksan and defender Jeyaraj had a couple of half chances but the score line remained the same at the half time.

Second half started with a lot of enthusiasm from both sides. Madhushan of Navy beat the goalkeeper with his shot on target but was defended on the goal-line by two outfield players. Amilan missed a sitter for the hosts in the 68th minute.

As the time grew old, both teams expanded their attacking play leaving spaces at the back. Rodrigo jumped onto the rebound of Fernando’s initial effort but St.Nicholas’ escaped the danger by a whisker.

However, escape wasn’t an option when skipper Krishantha Perera smashed the ball into the back of the net in the 77th minute to give Navy the lead. The corner kick was directed to the goal scorer who was waiting at the edge of the penalty box – a thorough exhibition of training ground stuff.

Amilan tried to respond immediately but the chance was wasted by Rozairoi. St.Nicholas’ committed men forward during the last 10 minutes but Navy SC saw off the pressure and the attacking threats of the players with exceptional zonal marking defending.

Navy SC Coach Dammika Athukorale had this to say after the match;

“Though we won, we wanted to be more clinical. The opponents were exceptional. We are facing Army SC in the next round. So we need to be well prepared.”

Sri Lanka out done by Malaysia

58 leagues to compete for the Junior Inter League Championship