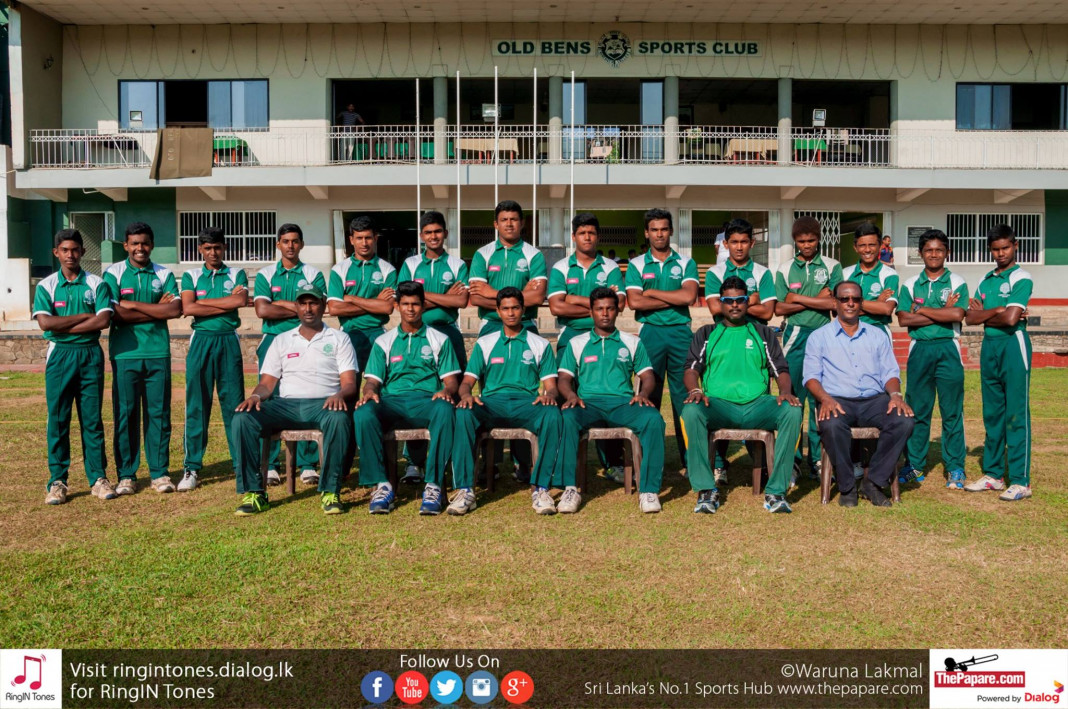 The under 19 all-island schools cricket season 2015/16 is reaching the business end with all the matches proceeding uninterrupted. Currently, St. Benedict’s College, Kotahena stands as a potent outfit which is capable of beating any school team in the island.

A Bit of History

With a rich history of over 150 years, St. Benedict’s College stands tall as one of the oldest schools in Sri Lanka. They have been playing cricket for more than 100 years now. In the last century, the Bens have produced superb players in the caliber of Ranjith Fernando, Ranjan Goonethilaka and Sunil Fernando, to name a few. They last won the all-island championship way back in 1964.

The Benedictines have also produced a fine all-rounder in Pradeep Hewage who captained the Sri Lanka Under 19 team in the Youth World Cup in South Africa in 1998. Recently, St. Benedict’s College have shown tremendous improvement in the field of cricket. In 2013 under the leadership of all-rounder Angelo Rathnasinghe they became the runners-up in the limited-overs tournament while last year they bagged the all-island T20 championship under left-hander Mahela Jayalath’s leadership.

With a young crop of players, Bens started off the season inconsistently. This season, St. Benedict’s College are in group A and currently sitting in 3rd position. From the 6 tournament games played so far, they have recorded a morale-boosting outright victory over De Mazenod College, Kandana which also brought home the ‘Lazallian Trophy’ to Colombo 13.

Right-handed top-order batsman Thulina Dilshan will lead the St. Benedict’s College outfit this season. He is a naturally attacking batsman with a sound technique. Recently, he hammered a brilliant 151 against Bandaranayake College, Gampaha and will look to continue his good form.

Right-arm fast-bowler Geethal Fernando is the leader of the bowling attack. He represented the Sri Lanka under 19s last year against Pakistan under 19s and performed exceptionally well. He is a genuine wicket-taker and will be a big threat to any team playing against St. Benedict’s College.

Vice-captain Madushan Kularathne is the lead spinner in the team and will look to use all his experience to win as many games for his team, bowling his right-arm off-spinners. Middle-order batsman Supun Lakmal and top-order batsman Vittorio Roberto will need to score consistently for their alma mater to strengthen the batting department.

Apart of Geethal, St. Benedict’s possess another exciting fast-bowler in the form of Poorna Charuka. The nippy right-arm seamer will be looking forward to teaming up with Geethal to demolish their opponents this season.

Left-hander Dinitha Basnayake has been amongst the runs this season and will be a vital cog in the St. Benedict’s outfit. Maleesha Senevirathne and Shehan Fernando are the two wicket-keepers’ in the squad while all-rounders such as Ashane Silva and Chamidu Wijesinghe has the ability of turning things around in their favour at any given time.

The backbone of St. Benedict’s College for so long, Vivian Saverymuthappulle will once again do his thankless job as the MIC of the team. Former Anthonians SC and Bloomfield C & AC off-spinner Sanjaya Dissanayake will coach the Benedictines this year. He has been in the coaching field for more than 10 years and will look to pass on his experiences to this young Bens outfit.

Last season, St. Benedict’s College Kotahena achieved something that they had been denied for many years, a championship. This year they will look to repeat their performance but it will be an uphill task with this young side. They will be a force to be reckoned with in the shorter-formats of the game but may struggle against the top teams in the knock-out stages of the two-day tournament.