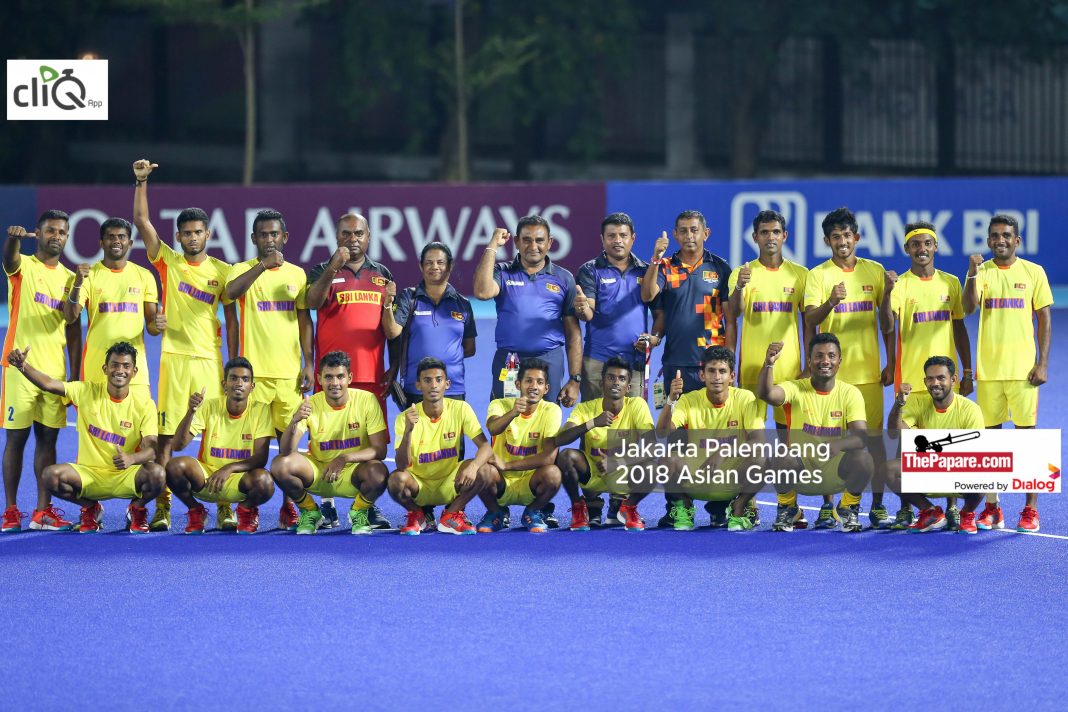 The Lankan stickers faced off against Hong Kong China in their 3rd Group Stage encounter at the Asian Games 2018.

The Sri Lankan Hockey team, currently ranked 9th in Asia, have long awaited a win in the prestigious Asian Games festival. 40 years and 10 editions later, the Lions find a win at the Games against Hong Kong in a doozy of a match.

Sri Lanka coming off two downright defeats to Japan and Korea earlier in the week, were in desperate need of a silver lining to stay alive in the Games. They managed to record their first victory with their performance today against Hong Kong, China with a score line of 4-1 at the end of the four quarters.

The first two minutes of the match was in fast pace with Lankan striker Anurada Suresh putting the Chinese goalkeeper to the test with 3 shots on goal. Right outside the five-minute mark, Sandaruwan Priyalanka scored Sri Lanka’s first goal in the game.

Anurada Suresh gets cooking in the second quarter with thundering slaps on goal from the whistle. He finally got his breakthrough in the 25th minute off a penalty conversion to extend the lead by 2 goals, going in to half time.

The third period rendered goalless at the whistle with multiple substitutions at play. Sandaruwan Priyalanka and Nalantha Karunamunige charged at goalie Hou Fung Chan in search of a goal, but Chan defended well enough to prevent it.

Evidently the liveliest quarter of the match, the Lankans managed two more goals for a convincing lead. Sandaruwan Priyalanka delivers his second stunner in the game as he slaps Sri Lanka’s third goal in the 50th minute. Chi Him Felix saves Hong Kong from a whitewash loss as he successfully converts a penalty shot to score Hong Kong’s one and only goal.

In the counter attack, Sri Lankan skipper Lahiru Weerasooriya closed out the quarter and match for Sri Lanka off a revised penalty shot.

Sri Lanka will face their final group stage encounter against Indonesia on the 26th August in a do-or-die battle.