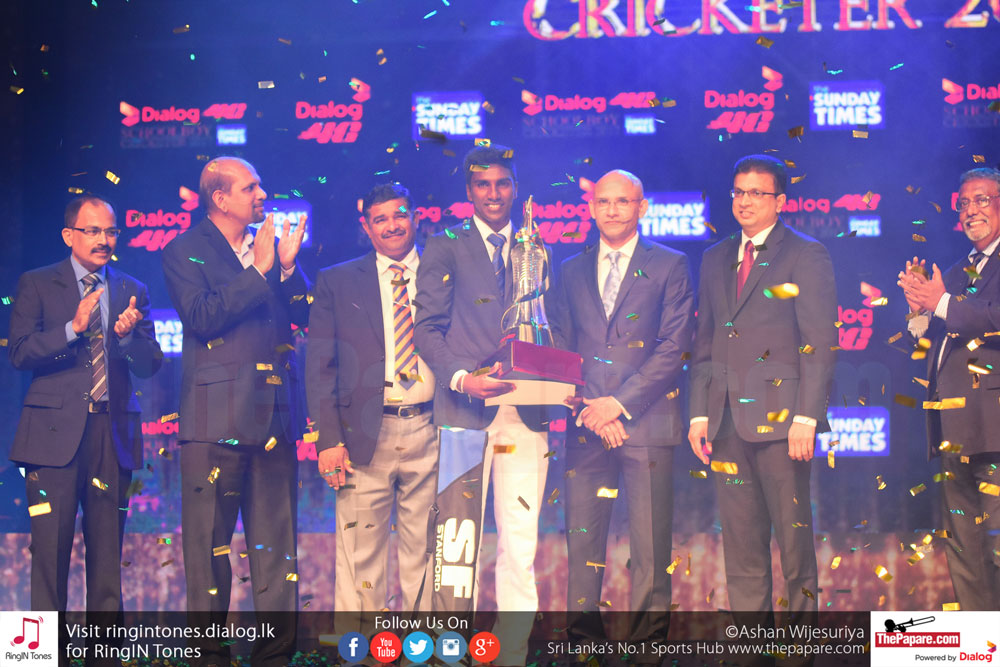 Sri Lanka U19 and P. de. S Kularathne College Ambalangoda fast bowler Nipun Ransika has been awarded as the Dialog 4G – The Sunday Times Schoolboy Cricketer of the Year 2017 at the gala awards ceremony held on Wednesday evening at Nelum Pokuna Theatre.

The division 1 schools were awarded in the All Island category while division 2 teams were prized in the Emerging category by a selection panel headed by Jayantha Senevirathne.

Ransika has been the best seamer for Sri Lanka U19 in the past year with exceptional performances in South Africa and Australia. He has claimed 51 wickets at school level and 34 wickets at international level during last year. Playing for a division 2 school, Ransika also bagged the Emerging Schools Best Bowler’s award.

“Just because you fail at a certain juncture that does not mean it is the end of the match or the game. The only weapon that you possess at that moment is self-assurance and self-confidence. You have come so far and have come on stage of this awards ceremony because you have been better than the rest. This is the thought that you must hang on to. You are always better than your opponent and you can sustain it as long as you are involved with this game.“ Atapattu said.

Nipun Dananjaya of St. Joseph Vaz College, Ambalangoda who smashed 880 runs and captured 71 wickets in 13 tournament matches won the Schoolboy Cricketer of the Year runner-up award as well as the Best All-Rounder’s award.

Hareen Buddhila of St. Aloysius’ College and Pathum Nissanka of Isipathana College claimed the Best Bowler and Best Batsman awards respectively. Buddhila took 76 scalps in 9 matches before being called for national duty while Nissanka accumulated 923 runs in 10 games with a best of 205.