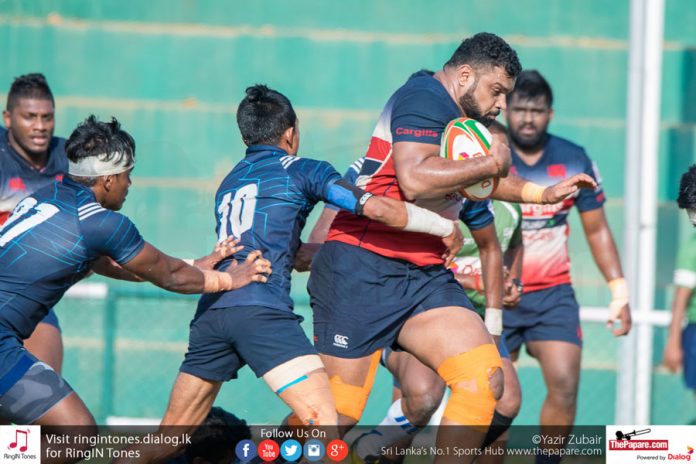 Kandy kicked off their Clifford Cup defence in fine manner. It was one way traffic at Pallekalle. Kandy managed to topple the Air Force team 53 points to 14. At half time it was 26 points to nil over the hapless Airmen. Kandy however had plenty of injury problems as Buwaneka Udangamuwa and Anurudda Wilwara missed out with Roshan Weerarathne.

Kandy started off well and it was Shehan Pathirana who drew first blood after some good opening minutes by the Airmen. Thilina Wijesinghe cleanly bisected and ran a good 60m before handing Shehan Pathirana with the ball to touch down. Thilina added the extras from the left corner flag. (Kandy 07-00 Air Force)

After some exchanges of hits from both sides Kandy yet again showed their class as Danushka Ranjan dived over for the second try. A line-out taken from right is spread wide into the hands of Ranjan to take two defenders with him over the line. Thilina nailed another juicy kick over. (Kandy 14-00 Air Force)

Shehan Pathirana went over for his second try of the game. Sooriyabandara handed a lovely inside pass to Pathirana from the back of the scrum before evading the flankers on his way. Thilina had the easiest of under the posts kicks to extend the lead by another 7 points. (Kandy 21-00 Air Force)

It was raining tries at Pallekalle around this time as Richard Dharmapala found his way over the try line. Srinath Sooriyabandara’s box kick found Tharindu Chathuranga before one simple pass found Richard who pierced the gaps with ease for a good 40m. Thilina sent it slightly wide of the upright from the corner flag. (Kandy 26-00 Air Force)

It was complete dominance from Kandy at half-time. Kandy ran away with the game and Air Force had no clue what Kandy was upto except for the first few minutes of the game.

Soon after the half time Kandy scored yet again through Richard’s second try of the game. After excellent decoy running, the ball ended out wide in the hands of Richard, who had one defender to outburn. Thilina missed the conversion from the right corner flag. (Kandy 31-00 Air Force)

Kandy extended the lead by another 3 points as Thilina Wijesinghe bisected the posts. (Kandy 34-00 Air Force)

Air Force finally scored a try as the number 13 of Air Force Soorya Krishan made a brilliant break stepping past the Kandy defence on his way to the try line. Charith Seneviratne added the extras. (Kandy 34-07 Air Force)

Kandy hit straight back through Yakoob Ali as Kandy’s scrum barged their way over line with Ali at the back of the scrum. Jamaldeen missed the conversion. (Kandy 39-07 Air Force)

Kandy’s day became even better as they instrumented a try from their own try line. Loose ball cleared by Jamaldeen was chased down by Lavanga Perera who handed his twin brother Oshan a free and straight sprint to the line. Thilina added the extras. (Kandy 46-07 Air Force)

Vishwamithra Jayasinghe scored his first try after his return. Loose ball collected by Thilina Wijesinghe was handed over to Jayasinghe who stretched over the line with ease. Thilina added the extras with ease. (Kandy 53-07 Air Force)

The consolation try of the Air Men can in the dying minutes when Jehan Seelagama went over. Charith Seneviratne added the extras as referee blew the long whistle to end the game.

Kandy will next meet CR &  FC  on Wednesday at the same venue.