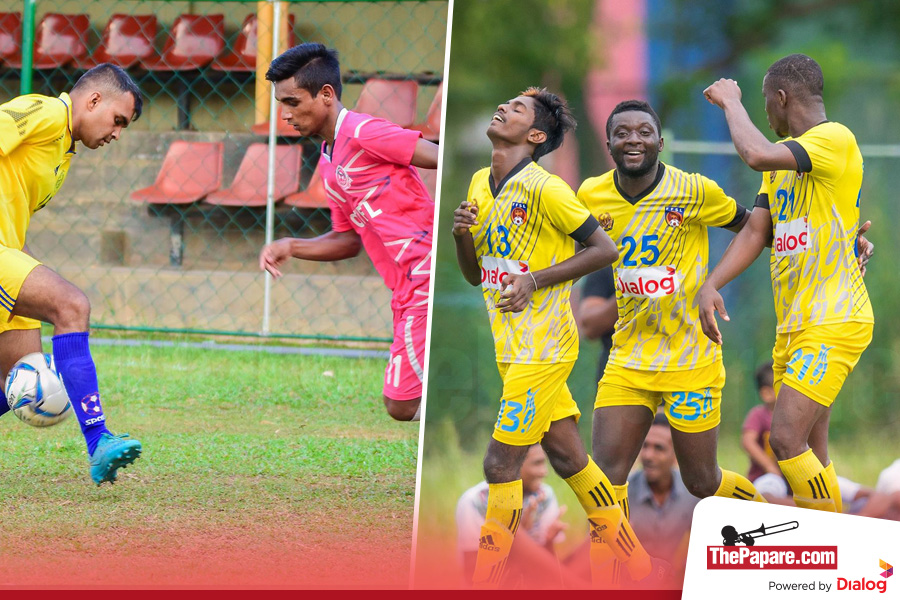 Java Lane defeated Prison SC 2-0 in a hard fought and a tense affair while Saunders drowned Municipal Council Rathnapura in a sea of goals in the 3 rd round of the 2016/17 FA Cup encounters played at the City Football Complex and Seewali Grounds, Rathnapura.

Java Lane entered to this year’s FA Cup in the 3rd round after getting knocked out in the quarter final of last season while Prison SC had a close 1-0 win against Jegameetpar SC in the 2nd round.

Prison SC had the better start against the hosts Java Lane SC. Prison got a free kick on the edge of the box where the effort sailed just over the crossbar. T.Jayakopan too had an effort going wide while Pradeep Danuka missed a header from a cross midway through the first half.

Java Lane who had a 6-1 thumping win over Cooray SC in the City FL President Cup during the weekend came into the game towards the latter part of the first half. They got back to back free-kicks while Mohamed Rizkhan’s effort over the goalkeeper bounced off the crossbar much to the agony of the players and fans.

However Java Lane took a 1-0 lead into half time after Rizkhan got on the end of a Naveen Jude through ball to score past the goalkeeper.

Early on in the 2nd half Java Lane received a penalty after Naveen Jude was fouled inside the penalty box. Mohamed Abdullah, who scored a penalty during the weekend, sent this one wide giving relief to the visitors.

The game progressed under a few tense situations with players and fans on the verge of letting their emotions boiling over.

Prabath Jayasiri then went onto save a Janaka Chaminda free-kick and deny Malaka Perera with his foot, after Mohamed Aleem did brilliantly to run down the wing and find Perera with a cut-back. Jayasiri was again the savior when he punched away a powerful left footed volley from Rizkhan.

With the game getting ever so tight with minutes ticking away Malaka Perera gave some breathing space for the hosts firing home from a difficult angle in the 77th minute.

Prison SC could not find a goal as referee Dayan Sendanayake blew for full time.

The Kings of the FA Cup, Saunders SC secured a comfortable 9-0 win with in-form striker Chryshantha Abeysekara scoring a hat-trick.

It was a daunting task for the unheralded Rathnapura Municipal Council, who had little chance against the 21 time FA Cup champions.

The hosts stopped the scoring but only for 20 minutes as Abeysekara scored his first and Sajith Dharmapala made it 4-0 with a penalty going into the half time break.

Abeysekara scored in the 52nd minute and Niresh added his 2nd in the 57th minute.

Zakeer Ahamed who replaced Udara scored twice soon after coming on while Abeysekara completed his hat-trick in the 86th minute.

Keane: Manchester United should be ashamed for sacking Moyes

Airmen down Ugyen Academy in the President’s cup opener.