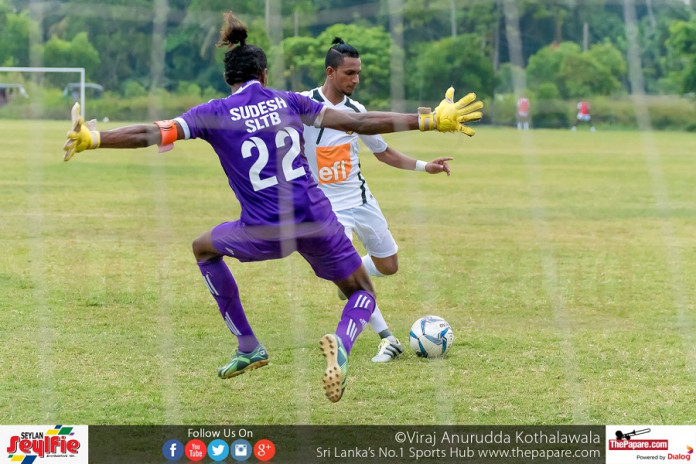 After a lackluster first half Colombo FC recovered to win 2-0 against ten man SLTB SC in an FA Cup round of 64 encounter marred by a few questionable decisions at the Kelaniya Football Complex.

Colombo FC fielding an all Sri Lankan outfit, after the new rule not allowing any foreign players for this year’s FA Cup, struggled in the early going. It was mainly evident defensively where the reigning Dialog Champions League winners did not have the midfield powerhouse Momas Yapo.

However it was Colombo FC who threatened first with goalkeeper Sudesh Suranga having to make a near post save from Nagur Meera. SLTB too got a couple of opportunities but one was deemed offside by the linesman and the other went just wide of the far post from a Chamara Jayaweera effort.

Zarwan Johar then lobbed the ball over the def but Sudesh made a brilliant save off a Danushka Madushanka shot on the turn to keep favourites Colombo FC goalless. Zarwan then had a shot blocked while Colombo FC’s set piece execution looked off-colour.

SLTB had the best chance to score just before half time when a cross towards the far post found an open P.C.Nadeesha but unfortunately for the visitors he could not get a telling touch on the ball.

Colombo FC responded immediately after the break with new man Dilan Kaushalya scoring past Sudesh. Leading upto the goal Colombo FC had a legitimate penalty appeal turned down by referee Dayan Sendanayake when Madushanka looked to have been pulled down inside the box.

Dilan then shot straight at the goalkeeper from close range and then scored after Sudesh fumbled the ball, a powerful effort from Zarwan, at his feet only to see the linesman raising his flag for an offside. Nadeesha got his marching orders for a second bookable offense which meant SLTB had to play over half an hour with ten men.

Even with a player down SLTB looked threatening in patches with Iroshan Grero unable to direct his header, from a free-kick, goal wards.

Zarwan narrowly missed out on a goal when his free-kick on the left skimmed just past the near post while Madushanka’s one had too many touches, from another opportunity, allowed Sudesh to smother the ball.

A contentious moment occurred when a Colombo FC counter attack saw Sudesh Suranga stranded and while the defence recovered Ahamed Shazny had the ball in the back of the net only to be called offside even though it appeared as if there was a defender infront.

However the hosts shrugged off the disappointment as Madushanka burst through the defence to round off the goalkeeper and score after a 35 yard dash.

Zahira College’s Shafran Sathar made his club debut soon after replacing Dilan and could count himself unlucky not to have got on the scorecard in a bright cameo. Mohamed Imran was forced to make two awkward shots on target while Madushanka too tested Sudesh on the other end.

Zarwan almost capped off a fine performance with a magnificent goal but Sudesh was on hand to make another brilliant fingertip save from a free-kick on the edge of the box. That proved to be the last kick of the game as referee blew for full time.

Colombo FC Head Coach Mohamed Roomy had this to say on the tough fixture;

“I needed quick goals and Shazny is shaky against hard defenders. That is the reason I played Zarwan in midfield and Shanzy upfront. We felt the absence of Momas Yapo when we were defending, not much in attack. Zarwan and Ramwe played well. Dilan is struggling but that is because he is having a back injury. He will recover soon. We rectified our mistakes in the 2nd half and when they pushed up we played the ball over the defensive line which worked.”

“I only took over the side a couple of months ago. They still haven’t gelled together. I thought we were a bit scared against the big name opposition. Going down to 10 men affected us and if we had scored that header it would have been much different.”

58 leagues to compete for the Junior Inter League Championship

Van Gaal agrees to be next Manchester United manager