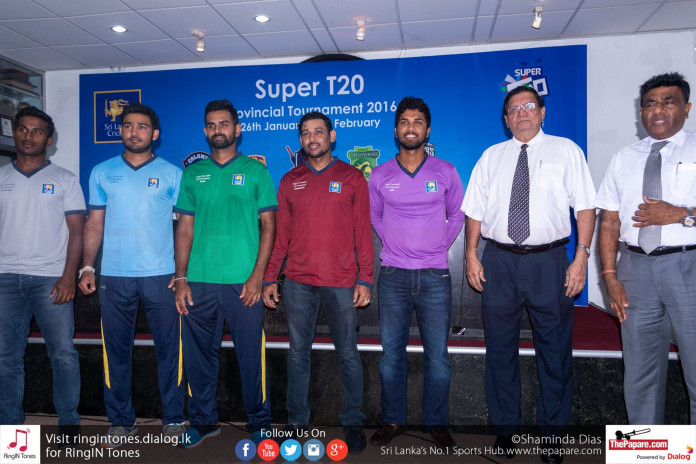 A media briefing was held today at the Sri Lanka Cricket headquarters ahead of the Super T20 Provincial tournament which is to kick off tomorrow at the R. Premadasa Cricket Stadium.

The tournament will be held throughout 7 days with 4 rest days in between starting tomorrow at the R. Premadasa stadium Colombo. Vice president Mr. Mathivanan was proud to announce that the winning team would be awarded with a 1 million rupee cash prize while a cash prize of 750,000/= would be awarded to the runner up team.

The Championship will be battled off against 5 provincial teams under the leadership of national cricketers in the likes of TM Dilshan, Dinesh Chandimal, Lahiru Thirimanne, Milinda Siriwardane and Mahela Udawatte.

The 5 provincial teams are as follows;

The most senior of the captains TM Dilshan said that “this tournament is a great stage for youngsters to showcase their talents ahead of the Asia cup and the World Cup”. He also added that “this is a great initiation by the SLCB and urged the young cricketers to make full advantage of this opportunity”

Lahiru Thirimanne had something similar to say while adding that “this is crucial in identifying young talent through a competitive selection process”. Adding to what Thirimanne said Dinesh Chandimal thanked SLC for organizing this championship and commented that “one can only expect the highest breed of cricket being played”.

President SLC Hon. Sumathipala said “we are happy to take the initiative to organize this tournament as this will be a great grounds for selection ahead of the upcoming T20 series against India, the Asia Cup and finally the T20 World Cup”. “The best of the best of Sri Lanka Cricket will be playing head to head; the cream of Sri Lankan cricket and nothing but exceptional cricket can be expected” he added. On a more light hearted comment Hon. President mentioned “I am glad to see Dilshan who captained a team at the inaugural tournament held in 2003 captain a team in this years edition, 13 years down the line”.

The tournament which starts tomorrow will host two games per day while, the finals on the 5th of February will be played under lights at the Kettharama Stadium.

Catch the live action on ThePapare.com as we bring you live pictures of the semi-finals and Finals of the tournament.